Posted on January 18, 2013 by Stanley Fefferman 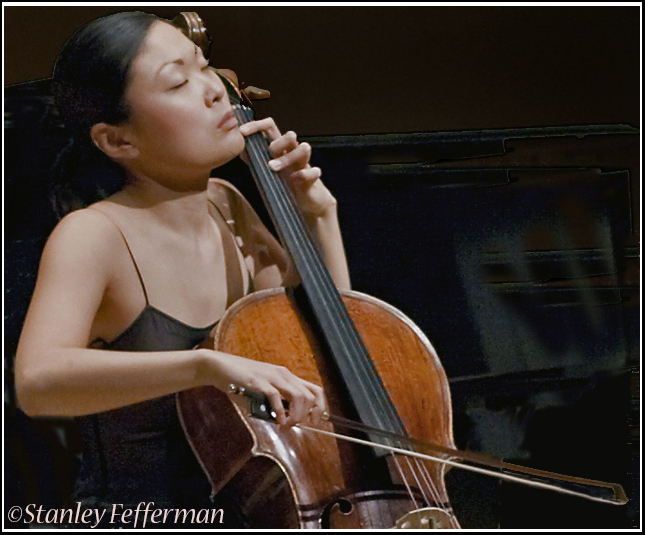 The legendary cellist Pablo Casals chose to remember and share only his positive impressions of other people’s cello performances. Following his example, I can say my first impression of Kaori Yamagami’s solo cello recital last evening was her bravery. What an awesome risk it is to sit in front of an audience and abandon yourself to the magnificent beast that a cello is.

Koari Yamagami plunged into her solo recital last evening with Bach’s Suite No.1, in G for unaccompanied cello, BMV 1007. Her style seeks out the emotional highs and lows, the extreme registral shifts and her intonation is impressive, especially in the deep grindings. I also enjoyed the smooth, even flow of the Sarabande. Toiling through the Bach seemed to relax her, and right from the start of Hindemith’s Sonata for Solo Cello, Opus 25, No. 3 (1922), Ms. Yamagami let us know she was having fun.

The music is quirky: contrasting passages are symmetrically grouped in five short movements with a pair of fast movements surrounding the long slow one at the centre. Ms. Yamagami showed great flexibility, shifting her enjoyment from the soaring emotional flow of the opening passage to the sharp angles, strained double stops, curt meanderings, mutterings, and brief, abrasive excursions that follow. Her voicings, especially in the second movement, are human, alive, full of a goofy humour, and fun. In the third she expresses a mahogany melancholy, tender pathos with deft, deeply felt bowings. Ms. Yamagami takes the concluding movement at a gallop that blends the melodic, percussive, and comic elements of Hindemith’s shapely work. It is as if she takes on the ease of this work that was written mostly in a single day.

Her technique in Giovanni Sollima’s Alone (1999) was dazzling. The opening calls for her to play arco, often double and triple stopped, punctuated by delicate pizzicato plinkings embellished with glissando’s, and she made it look easy. The emotion ranges from mournful groanings to the locomotive gaiety of a hoedown, the pace from slow-mo drag to fiendishly fast. Solima, a Sicilian-born cellist who has collaborated with Patti Smith is a real find.

Ms.Yamagami’s performance of the Bach Suite (No. 5 in C Minor) benefitted from the energy she generated with Hindemith and Sollima, though it retained a sense of remoteness. However, the Reger and Cassado Suites that followed brought her back into the heart of things. The Reger Suite No.1, Op.131c (1915) owes a lot to both Bach and Brahms, and makes huge technical demands on the soloist. While she met these demands, Kaori’s rhythmic strength, her sense of dramatic voicing, and her humour were outstanding.

The Suite for Solo Cello (1926) by Gaspar Cassado, a man who’s inventive life would make a good movie, is an adventurous composition that pulses with bagpipe drones, and dances in flambouyant Habanera figures. The demands of this three movement Suite played to Ms. Yamagami’s strengths in colour, rhythm and drama, bringing to a successful end this varied and personalized program.