Posted on January 20, 2013 by Stanley Fefferman 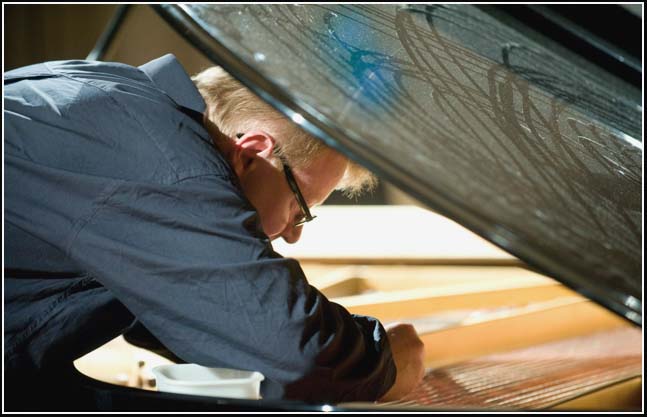 Robert Aitken invited Ensemble SurPlus to Toronto from his old stomping grounds in Freiburg, Germany, to perform new compositions by non-mainstream composers. SurPlus, with their audio/video-electro-tech partners EXPERIMENTAL STUDIO of SWR are a bold bunch, taking on compositions regardless of “style, intellectual and technical difficulty.” I let them bend my ear last night at the Music Gallery, and they blew my mind.

Claus-Steffen Mankoff’s Hommage á Daniel Libeskind seeks out a connection point between the art of the architect (of the new wing of Toronto’s ROM), and Mankoff’s own music. The key, In both cases, is fragmentation or deconstruction of established aesthetic forms reassembled into new, cool, expressive forms.  Libeskind’s addition is just the poke-in-the-eye Toronto’s staid Bloor Street needed. Mankoff’s “Hommage,” orchestrated for winds/string sextet is based on the poke-in-the-eye he got from Libeskind’s Jewish Museum in Berlin. The music is a sequence of abstract miniatures whose architecture of sharp, jagged, repeated strokes and sonic planes induce a cool, stillness. It is playful, non-linear, yet you get a sense of narrative. The fortissimos sometimes sound angry and destructive, but that slides into sweetness and laughter. The best part of my listening was a vivid, almost hallucinatory sense that things were there and not there, were real one moment, and illusory the next. It goes without saying, the work was well-played, but then again, how could you know that?

The stage changed shape for Daniel Peter Biro’s piece Gam Zera, orchestrated for contralto, alto flute, clarinet, percussion, piano, violin, cello, double bass and live electronics. The players were spread across the rear of the stage, creating between the audience and them a deep space that was mediated by the conductor, Erich Wagner. Outstanding elements were the voice of contralto Noa Frenkel, rising from a gollum-like sibilant whisper to a liquid amber flow; the variegated texture of live music, live electronic resampling, and taped inserts; and the physical impact of surround sounds, so vivid it created a feeling of quasi multi-dimensional paranoia.

The music score and lyrics are based on a number of Hebrew sacred texts. What is interesting to learn from the composer’s talk and his program notes is that Gematria, the system of Hebrew alphanumeric symbolism, serves to structure “musical parameters such as pitch, rhythm, meter, tempo…[as well as]…phonetics, musical meaning, electronic spatialization and processing. What is interesting about that, to me, is the free, floaty, wide-awake feeling this highly ritualized music induced in me, and the sense that the musical abstractions became an invitation to visit a realm of rich and colourful forms alive with power and meaning.

I liked Cornelius Schwer’s ‘poco cantabile’(2012) for it’s almost-melodies that were almost syncopated in the manner of Hindemith and Poulenc, and the development or devolution of these elements from traditional harmonic symmetries into abstraction and back again. The work sort of dances with the listener’s rhythmic expectations in a way that seems alternately disturbing and playful.

The evening ended with the basic ensemble swelling to fullness by the addition of bass flute, english horn, bass clarinet, saxophones alto and soprano, and horn. Ensemble SurPlus performed Yonsei (2010) by Dieter Mack. While participating in the general ‘avante-guard’ sound of all the works presented tonight, and the particular style of the “New Complexity” school that arose in Darmstadt through the efforts of Brian Ferneyhough and others, Yonsei had for me the distinction of carrying music right into the physical body. This composition, Dieter Mack explains, is based on a “short rhythmic cell which was developed and extended…using augmentation techniques.” I did hear what he claims are the ‘speech-like’ elements that suggest an imaginary language. And  beyond that, and beyond the disembodied snake-charmer riffs from the oboe, and the explosive chords of prepared piano, and the actual hissing of the players, was the feeling I sensed of the stretchings and lettings go that follow on a good yoga session. And then, as always after a New Music Concerts show, there were tasty snacks.