Posted on October 12, 2012 by Stanley Fefferman 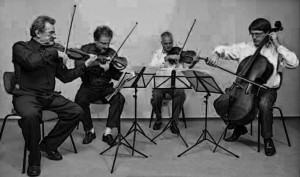 The qualities of this stellar ensemble from the Berlin Philharmonic Orchestra emerge in succession like evening stars.

First is the balance of  individual voices, each clear, all controlled. Then comes the plummy, warm tonal blend of textures modulated by subtle dynamic shifts. And since the opening work is the Mozart’s “Hoffmeister”  Quartet in D, K.499, there is sprightliness and an elegant sparkle in the music barely masking a darkness that wells up in all three works on the program.

This darkness becomes prominent in the single-themed first movement as a canonic dialogue between first violinist Daniel Stabrawa and the new member, cellist Dietmar Schwalke. The movement is also marked by contrapuntal outbursts contrasting passion and timidity in several pairings  including violist Neithard Resa and Christian Stadelmann’s second violin. Time seems to run out as this movement ends and leader and cellist introduce the Menuetto’s long-lined dancing theme.

The Adagio follows that, singing a melody about approaching death, its mournfulness restrained by the ensemble’s palpable discipline. The movement ends on an assertive surge that is allowed to taper towards extinction.

The first violin leads the ensemble without cello into the clamourous finale. Light and bouncy, the violins are rudely obstructed by the rising and falling voices of cello and viola. This tangle of strings resolves in a forthright, unified, bitter-sweet statement.

The classical period contributions of Mozart and the Beethoven that ended the evening are balanced by a mid-20th century work. Witold Lutoslawski’s first and only string quartet (1964) is an atonal, aleatory work organized not in movements but in mobiles that cue the musicians to play their parts ad lib, so that each performance is a bit different. Each of the thirteen mobiles “finishes when one player completes a particular line, signalling the beginning of the next mobile.

There are two main parts. A short introduction opens with a hesitant recitative by the first violin followed by vaporous ejaculations from the other players. The main weight of the work comes in the long concluding movement which begins violently, subsides into pianissimo, reshapes itself into a funereal march and concludes with the cello’s damped harmonics sounding like the twittering of souls in Hades.

The music is made of sonic squeaks, moans, screeches, the fury of flies buzzing over a carcass, the excited chatter of sales conventions, the distressed wail of sirens, the twitter of electronic signals coming to the radio of a ship foundering in a hurricane. The associations of this music are not nice, but they are very interesting, inevitably suggesting commentaries on life in the 20th Century and beyond. One thinks of T.S. Eliot’s phrase from The Wasteland “I think we are in rats’ alley/ Where the dead men lost their bones.”

The Quartett Berlin is reknowned for its ability to bring out ‘drama on a human scale’: this ability found expression in Beethoven’s String Quartet in E-flat, Op. 74 (Harp). There was an abundance of drama in Beethoven’s life from the summer of 1809, when his “Immortal Beloved” ended his hopes of every marrying, and Napolean’s cannons were assaulting the vestiges of his hearing. He was also seized by a writer’s block that lasted into autumn, inspiring thoughts of suicide: then this string quartet began to come out of him. The “Harp” reflects Beethoven’s alternating moods–the questioning, the sadness, and their resolution in energetic bursts of of blazing confidence.

This ensemble’s rendering of the pizzicato portions of Op. 74′s Allegro (that give it the nickname “Harp”), is stunning in it’s virtuosity, particularly the crystalline tones of Christian Stadelmann’s second violin, which also sometimes tickles the tearful flow of the Adagio. The Quartett’s closing of this movement with perfectly timed, unison phrasing, was jaw-dropping. An occasional shrillness in the first violin’s tone during the Presto’s capering gallop was the only moment in the evening that raised my eyebrow.

Webern wrote that “Quartet playing is the most glorious music-making there is.” That includes the playing of Quartett Berlin.