Posted on October 28, 2012 by Stanley Fefferman 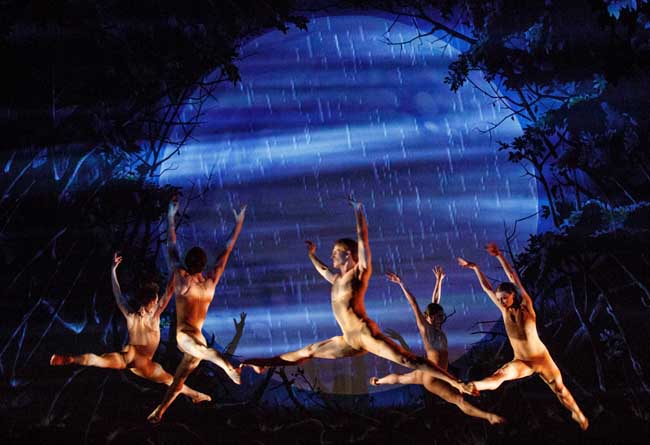 Twenty some years ago, Opera Atelier broke new ground by staging a period performance of Mozart’s The Magic Flute. Last night they broke out again by staging their first period performance of a Romantic opera. For their debut into masterpieces of the 19th century, the company and their musical partners Tafelmusik Orchestra, chose the 1835 musical drama that halted the dominance of Italian opera in Germany and paved the way for Wagner: Carl Maria von Weber’s Der Freischütz (The Marksman). Here’s the story.

Max, a huntsman who lately can’t hit anything, is losing face and faith. Fearing he is destined to fail in a ritual shooting contest that will cost him his job and his girl, Max does a deal with the Devil (aka The Dark Huntsman) that backfires: Max seemingly shoots his beloved Agathe and is sentenced to exile. In fact, he accidentally shoots the devil’s disicple, Kaspar. A holy man revives Agathe, gets Max’s sentence revoked, abolishes the shooting contest, and restores faith in religion.

Despite its corny, medieval premise, this work that is rarely performed outside of German-speaking countries, was a hit last night in Toronto. Opera Atelier proved to me that their sense of style could indeed bring the dying back to life.

The evening began pleasantly with Tafelmusik , conducted by David Fallis, playing Weber’s quaintly melodic “Overture” on period instruments that somehow made the past itself seem present. The curtain, before it goes up, displays a huge Gerard Gauci design of a stricken dove targeted in the sights of a scope with a red bull’s eye over it’s heart. This is the first of Gauci’s sets designed to charm and relax the audience by their perfect taste and coordination with Martha Mann’s gorgeous costumes. Later, during the satanic encounters in the forest, sets and costumes go to a whole new level of imagination, and work with Bonnie Beecher’s lighting and Raha Javanfar’s projections to just blow your mind.

When the curtain goes up, it’s all happy peasants singing and doing their rustic dances, but here it’s choreographer Jeannette Lajeunesse Zingg’s Artists of Atelier Ballet making the music live in the youthful beauty of their bodies. Ballet, happily, has a much bigger role in this production than in any other I can recall in many seasons of reviewing Opera Atelier.

The strongest performances by singers are in supporting roles. Carla Huhtanen totally shines as Agathe’s companion Aanchen. Coquettish to her finger-tips, funny in the nuanced way of a Maggie Smith, Ms. Huhtanen’s sterling soprano made her a friend to the audience who, it seemed, joined me in giving her the most enthusiastic ovation.

Vasil Garvanliev was a perfect fit for the baritone role of the villainous Devil’s disciple Kaspar, the forester who tempts Max into a diabolical deal. Garvanliev’s acting and his singing in the first act’s drinking song and solo “Vengeance will succeed,” show him at ease in a character that doesn’t desert him for a moment.

Der Freischütz is an opera for low-down male voices. Gustav Andreassen’s performance in the final moments of the opera is one of several stunning moments, partly due to the authority of his deep bass voice, and partly because he plays a holy hermit who could double for Jeff Bridges as sheriff in a Western. Curtis Sullivan’s bass-baritone is in every respect equal to his role as Samiel, the Dark Huntsman, while his spectacular physique costumed to seem naked is used to maximum effect. Olivier Laquerre, the elegant bass-baritone who sings the role of Kuno, father-of-the-bride and patron of Max, convinces with his friendly warmth. Michael Nyby in the dual roles of Max’s rival Killian and the Alpha Male Prince Ottokar gets to show more life in the former role, and is an adequate as the symbolic Ottokar.

The title-role is played by tenor Kresimir Spicer who started out seeming tense and mannered, his delivery explosively uneven during the opening scenes of the shooting competition, including the trio with Kaspar and Kuno, and his solo “Durch die Walder.” Spicer seemed to relax in the boudoir scenes, where he also did his best singing. Meghan Lindsay did a creditable job with the gorgeous arias given her, notably “Leise, leise, fromme Wiese” and the third act cavatina to the sun. At times her character was dulled by a Jane Austenish manner. I loved her duets with Annchen.

Generally, all objections to details of the performance were swept away by the boldness of the production, Marshall Pynkosky’s conception and direction, in particular the decision to give all recitatives in English, which made at least half of the performance native to a North American Audience.

I am prepared to believe Opera Atelier have what it takes to make good on their promise to extend their ideas about period productions to Wagner and beyond into the 20th Century.

The production continues through November 3. http://www.operaatelier.com/season/derfreischutz.htm