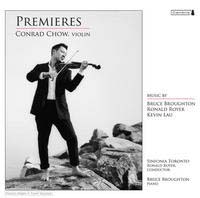 Kevin Lau’s “Joy” (for violin and String Orchestra) has a theme of exquisite beauty that Chow’s violin renders sweet and gentle, strangely redolent of heather.

Ronald Royer writes Rhapsodies (and Romances). I enjoyed the masterful and witty  “Rhapsody for Clarinet, Percussion and Strings,” that he contributed to The Nightingale’s Rhapsody, a 2010 CD with Clarinetist Jerome Summers. Conrad Chow chose to première Royer’s “Rhapsody for Violin and Chamber Orchestra.” This two-movement work charms with its late-romantic, early-modernist manner, but the music’s lyrical liveliness makes it more than a mere hearkening back.

Royer himself conducting the Sinfonia Toronto draws a drama alert out of the winds’ and harp’s middle-eastern melody. Chow’s violin in concert with the winds underline the motif strongly, as if with kohl, and the subsequent rich orchestration is marked by touches of dissonance in the manner of Britten.

The second movement opens with a slow solo, gains complexity and momentum, working up a heavy pulsation over which Chow’s violin does a gritty, antic, dance that leads the mind to the colourful rhythms of Shostakovich and Rimsky-Koraskov.

Royer’s “In Memoriam to J.S. Bach” strengthens the neo-baroque aspect of Chow’s program, but with a slightly tart modern touch. Royer’s work is appealing as an impressionistic update of Bach-as-inspiration. It is also a moody work, the emotions going to excess before being reined in by step-wise Brandenburgerish references.

Broughton’s compositions are the core of the CD. They open and close it and afford Chow space to show his styles. The first movement of Three Incongruities for Violin and Chamber Orchestra mingle the sounds of Bach and hoedown, or if you prefer, sounds courtly and folky. In the second movement, marked ‘slow, in a singing style,’ Chow’s hand on the bow is light and lovely, sad and slow: the violin’s tone is sometimes like a clarinet, sometimes harsh, double-stopped and dissonant, the tempo varying from fleet to wistful and back. The finale brings back the country-jig: the violin imitates a penny-whistle, and among the reflective interludes is the sound of bagpipes.

The CD closes with charming Broughton folk tunes associated with the California Goldrush, and a respectable and very well done  bit of Chopin, the Nocturne in C-Sharp Minor, Op. posth.

This CD has the strength of internal unity. You can feel it flow through the program that Chow executes in synch with the fine Sinfonia Toronto. It’s obvious that Premières is a thoughtfully prepared piece of work, and for that reason alone it deserves an audience.