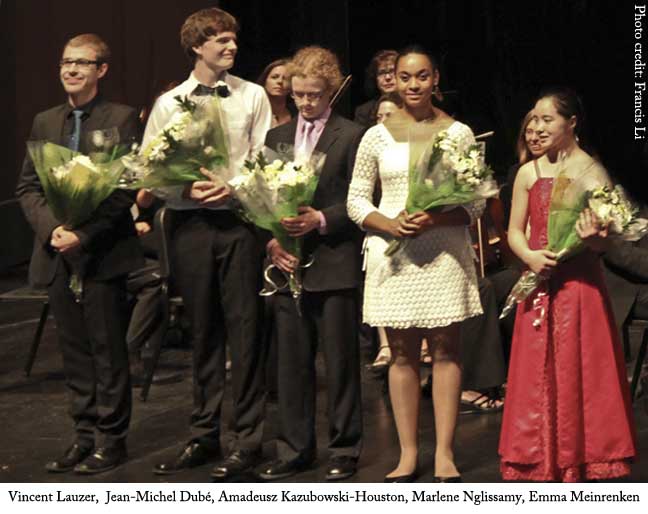 Five stars of the future made a joyful noise last night. They are the Grand Prize winners of the Canadian Music Competition categories (ages 7-30). The grandest of them, the 2012 Stepping Stone winner, is Vincent Lauzer.

Previous winners at this level include Martin Beaver, James Ehnes, Angela Hewitt, Marc-Andre Hamelin, and Annalee Patipatanakoon–all pianists and violin-players. This year, Vincent Lauzer joined this stellar Who’s-Who list by blowing all his competitors away with a recorder.

M. Lauzer opened the show solo on tenor recorder with a bold-as-brass performance of Big Baboon (1988) by Paul Leenhouts. His command of this audacious and difficult score, his display of extended techniques including two kiais,was both astonishing and charming.

Vivaldi’s Concerto RV.445 in E minor showcased M. Lauzer’s more conventional gifts, this time on a sopranino recorder. His tone was exquisite, his arpeggios smooth as water over pebbles, and his timbres steady while he ranged from birdlike to organ tones, always in perfect synch with the chamber orchestra.

He played as though he were part of the instrument, as though a single column of air flowed through his body and the recorder. This is the point at which I admit, happily, that music goes beyond words.

Uri Mayer’s chamber orchestra took on more strings and some winds for Mozart’s Concerto in B flat major, K.191/186e with 19 year old soloist Marlène Ngalissamy playing her bassoon. Her style is effortless, her breath-control impressive, especially in the very low registers, and she displays a full palette of colours. Ms. Ngalissamy’s lyrical rendering of the Andante’s love-song sent shivers up my spine. My attention wandered a bit during the Rondo finale which was excellent but seemed to call for a bit more letting go into the brilliance of Mozart.

Maestro Mayer’s orchestra again expanded the winds, added brass and harp for Sarasate’s Carmen Fantasy, Op. 25 with 12 year old Emma Meinrenken the violin soloist. Part-way through the “Aragonaise,” Emma’s nervousness dissolved, her proud demeanour and technical excellence, especially her command of sul ponticello bowing, came on display. She developed considerable passion during the “Habanera.” I was moved by her playing of the “Interlude” which had deep emotion. Ms. Meinrenken’s pizzicato during the “Seguidilla” impressed, and her energy during the closing “Gypsy Dance” brought the audience to its feet.

After intermission, pianists occupied the winner’s circle. 15 year old Amadeusz Kazubowski-Houston took on the challenges of the first movement of Tchaikovsky’s Piano Concerto No.1 in B flat minor, Op. 23. This young man stepped up to the composer’s demands for moods shifting from delicacy through delight, thunderous passion through lyrical contemplation, from melancholy to rhapsody, as well as to daunting technical challenges. Given the tremendous range of materials here for both the soloist and orchestra, I would have liked a stronger sense of continuity between episodes.

Prokofiev’s Piano Concerto No. 3 in C major, Op. 26 took Jean-Michel Dubé all the way like Cassius Clay. He performed the first movement which is harmonically lively, chromatic, with sudden key shifts, bravura passages and quirky humor. The solo writing for the piano, often percussive, is fiendishly virtuosic. I feel that M. Dubé dissolves all demands into the ubiquitous light of his imagination. To convey his champion-level style I must borrow from boxing lore the phrase—“Float like a Butterfly, Sting like a Bee.”

This is the performance that raised the roof last night, on its own merits, but also because it came at the end of an evening of music that was great on its own and also great with the youthful promise of all the players. Life in time will strip away the show from these performances and reveal the strength of artistry at the core of each of these musicians. We have the privilege of sharing their process by listening.

This is the CMC website, where you can learn MORE.