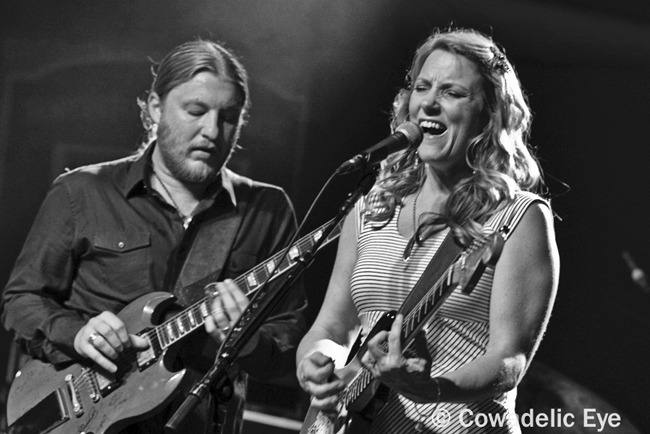 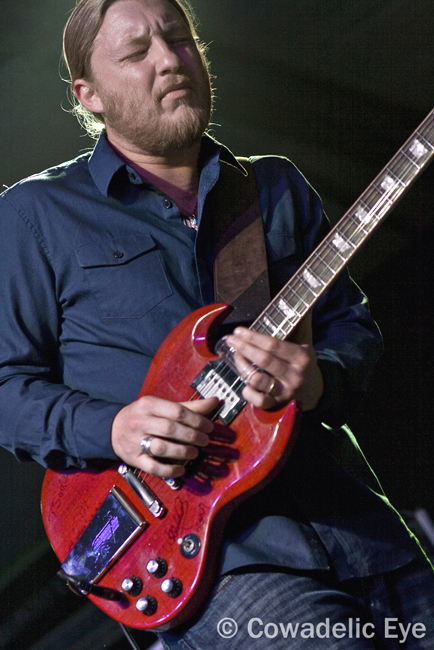 Susan led off singing a couple of soulful ballads (in her Bonnie Raitt voice) from the Grammy Best Blues winning album Revelator: “Don’t Let Me Slide,” (with a screaming solo by Derek), and (after a “Swamp Raga” intro) the gentle “Midnight in Harlem,”(by backup singer Mike Mattison) where Derek’s guitar is a giant bullfrog wailing into the night.

They revive Harry Nilsson’s 1968 “Everybody’s Talking At Me,” flattening the melody, rhythms, and phrasing, so it comes out rocking on a steady beat and sounding strangely but nicely like The Bands’ ‘”You Don’t Know the Shape I’m in.” Then Mike Mattison took the vocal on “Just What You Deserve,” and Mr.& Mrs. T followed that with a hot guitar duet. Singer Mark Rivers did the honours on “Shelter.”

Brothers Kofi an Oteil Burbridge, did brilliant work racing bass and flute riffs on tunes from TTB’s newest album, the jazzy collective effort Everybody’d Talkin’. Susan goes totally crazy on my personal favourite number, “Keys to the Highway,” singing and (listen to her) playing the blues to raise John Lee Hooker up from where-ever he is. Then there was Stevie Wonder’s “Uptight, Everything’s Alright,” with a solo by Maurice Brown, and a 2 drum duel.

This band owes a lot to the Allman brothers, and the Isley Brothers, and they pay it all forward and back many times over. I wish them great fortune and fame, till I see them here again.