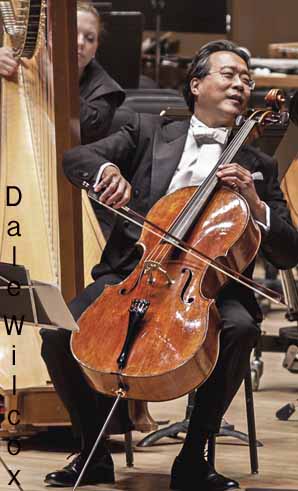 Was it a miracle of programming that three unrelated compositions seemed to share a melancholy, Romantic family resemblance, or was it due to the power of the master-artist  in the house, cellist Yo-Yo Ma? Whatever it was, the audience at Roy Thomson Hall got high and stayed high, losing themselves in an excitement that spilled over as applause even between movements.

First configuration on the stage was Yo-Yo Ma grouped with eight principal instrumentalists plus off-stage tape to give us Dmitri Yanov-Yanovsky’s Night Music: Voice in the Leaves  composed in 2000 for the Mr. Ma’s Silk Road Ensemble.

If you can imagine an erratic flow of outdoor noises that suggest fragments of music searching for a melody, and if you add a track of sounds from a neurological lab—the buzz and ping of neural firing mixed with the pluck and snap of muscle fibre responses, you will be on your way to hearing what I heard during the first half of this work. Follow this with an hallucinatory blend of offstage choral voices singing in Uzbek over the drone of double-bass mixed with the instrumental twitter. If 16 minutes of this makes you feel you’d like to hear more, you will be on the same page as myself and last evening’s audience.

A singular oddity is that the voice of Elgar’s theme appeared to me midway through Night Music: Voice in the Leaves.

The numbers shifted from 9 musicians to over 90 making a journey to Hollywood in 1940 and 35 minutes of Sergei Rachmaninoff’s last composition, Symphonic Dances, Op.45.

The first movement blends irony and nostalgia, beginning with a march featuring trumpets, fife and drum, not really martial but more mocking, like Prokofiev’s caricatures: this dissolves into an elegiac melody introduced by the alto saxophone that brings associations of “Greensleeves”.

The second movement continues the mixed mood in the tempo of a heavy-footed Viennese Waltz ( World War II was in progress). It spins off into a phantasmagoric drama that climaxes and vanishes. The Finale, based on a “dance of death,” explodes in  brass and hysterical woodwinds studded with chimes, subsiding after a William Tell fanfare into what sounds like the consolations of Russian Orthodox religion.

The evening climaxed in England at the close of World War I with Edward Elgar’s Cello Concerto in E Minor, Op. 85 in four movements with Yo-Yo Ma as soloist and Peter Oundjian conducting a reduced orchestra.

I imagine Mr. Ma’s preference set the tempo at the slow end of Adagio to express the preternaturally gentle, refined, delicate voice of his cello. The orchestral contribution under Mr. Oundjian’s baton was noticeably lucid. I particularly enjoyed the panoramic sweep of the first movement, the lyrical, dreamlike (Scottish) fantasy of the Lento, followed in the third movement by enriched, almost Gypsy dramatic dances. Yo-Yo Ma’s cadenza and gentle recitative in the final Allegro literally sings.

The vision of Elgar’s Cello Concerto is said to be post-war and uncompromisingly bleak, at best a grim march into an unknown future. Yo-Yo Ma’s account with the TSO moves with a humanity that expands and extends itself outward like warmth emanating from an indomitable generosity, or so it seems to me. Generosity of spirit such as we get from a major artist allows the differences that separate to dissolve, and allows similarities to gather together in forms. That’s how people looking at a Picasso can be seen  as having features that blend into the painting they are standing in front of. And that’s how a great performer’s generosity can bring this evening’s unrelated compositions to share a family resemblance.