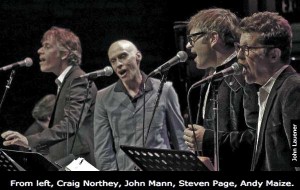 I attended this concert with my son. Eric relocated the family Sgt. Pepper album to his room when he was 3 and played it day and night. When he was 13 he had his own band that covered the Beatles for the high school dance. I’m saying this album has been loved ‘in my life.’

Last night I loved it more. Not better, just more. The Art of Time’s version—each song totally re-imagined by a jazz-pop-folk-classical specialist to sound a little different—but each difference somehow invoked the original which also sang in my head like a ghost.

Music Director Andrew Burashko introduced the first number, “Strawberry Fields” as an included reject from the album (released same year, ’67, as a double-sided single with “Penny Lane”). It opens in Art of Time chamber-music mode—Rachel Mercer heavy on the cello—moves towards the mainstream on Joe Philips’ base line, and on the third chorus finally goes rock, but concludes Art of Time-wise with a mariachi riff from Larry Larson’s trumpet.

The show’s fab four, Steven Page, John Mann, Andy Maize and Craig Northey collaborated nicely on a version of “Sgt. Pepper” that was suitably psychedelic in homage to George Martin, though spiced with some klezmer and a kind of Euro/Cabaret/Kurt Weil/Tom Waits dissonance that is the Art of Time signature on this album. “Lucy in the Sky” was thin; “Getting Better” was better. Craig Northey’s “Mr. Kite” made me nostalgic. John Mann, possibly the best singer in the group did the whole show clutching a page of lyrics in his hand which kept me running this line from Dylan’s “Hard Rain”—“I’ll know my song well before I start singing.” Side one ended with Steven Page moving the show into some deep emotion with “She is leaving.”

Side Two: George Harrison’s “Within Without” sung a bit weakly by Andy Maize, redeemed by terrific instrumentals– Larson’s trumpet blended into Carnatic string sonics from Stephen Sitarski and Doug Perry, while Rachel Mercer plucked her cello and Burashko himself played a chord inside the piano.

Stephen Page satisfied by keying “Lovely Rita” up to Paul’s original pitch and the band moved from an old-time brass vamp into a big swing band sound on John Johnson’s sax and another thrilling trumpet figure. “Sgt. Pepper’s Lonely Hearts Club Band” also wailed up to the Beatle’s thrill level on my meter, sustained by Rob Piltch’s electric guitar. Andy Maize was seriously moving on “A Day in the Life.”

The evening ended with a sing-along version of “All You Need is Love,” and at the time, it seemed to be the whole truth.

Wind and rain notwithstanding the house was packed to the rafters. The show closes tonight. Catch it if you can.