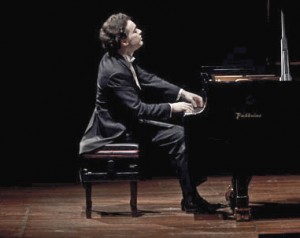 Edvard Grieg was 25 and newly married the summer he composed his one and only Piano Concerto in A minor, Op. 16. I remember listening to Eugene Ormandy’s recording with Arthur Rubenstein on my honeymoon in the Laurentians.

The Grieg always speaks to me of young love. Perhaps that is why it is one of the most frequently played piano concertos in the world. And perhaps, because it is such a safe crowd-pleaser, Evgeny Kissin and Sir Andrew Davis decided to take a few chances with their performance of it with the TSO.

Sir Andrew reined in his orchestra to a slower than usual tempo, letting the timpani roll spread without anticipation. Kissin’s entrance was understated, a gentle balance of lyrical and rhythmic values. His runs are crystalline, rising imperceptibly to crescendo and fading to the barest whisper, avoiding sentimentality at every turn. Especially in the climactic first-movement cadenza, it was not the bravura but the ease of his virtuosity that gave most pleasure.

The Adagio brought to mind the word ‘compassion.’ I enjoyed, as if for the first time, the gentle interplay of piano with lyric flute, sustained horn and cello breathing kisses to joy on the wing.

Kissin brought surprising depth and emotion to the folkish dance melodies of the finale, and played with the orchestra to broaden the mood at the Concerto’s anthemic conclusion from lyricism to reverence.

This performance honoured the courage of young love.

Sir Andrew, a former conductor of the TSO (1975-’88) and currently in Toronto conducting the Canadian Opera Company, balanced the program with 40 minutes of music from the lighter side of Richard Straus: Don Juan, and Suite from Der Rosenkavalier, featuring nice work from TSO soloists, particularly concertmaster Jonathan Crow, and Oboist Sarah Jeffrey.

Davis, Strauss, and the TSO cook up a rare feast of orchestration. Sit down and enjoy it if you can at Saturday evening’s encore. For more details and ticket information, click here.