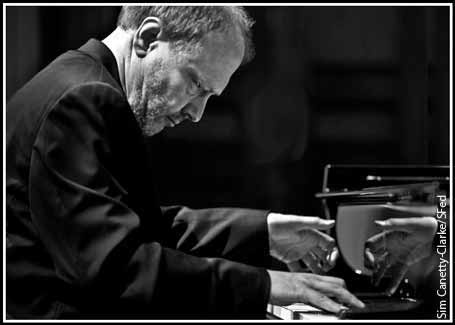 Marc-André Hamelin’s picture of Haydn’s Piano Sonata No.53 in E minor, Hob.XVI:34 is like a platinum print with strong blacks, delicate, clear whites, the grayscale tones all present but vividly separated.  Hamelin plays the slow movement with remarkable intimacy, as if he were the composer picking out an improvised melody, lingering on a note, pausing after an interval, and generally getting into a peaceful, easy feeling. He dovetails into the  quick and delicate Scherzo, ramping up the dynamics and following with awesome decelerandos. You can just see those little Meissen figurines rotating on their wind-up bases.

Schumann’s 21 part piano cycle, Carnaval, opens with a combination of triple forte bass chords, Bam-Bam-Bam, and a slow curve that signals the bipolar span of the composer’s musical associations. These associations include portraits of Schumann’s two girlfriends (Ernestine and Clara), Commedia dell’arte characters (Pierrot, Harlequin), fellow composers like Chopin and Paganini, Schumann’s alter-egos (Eusebius and Florestan), and a biblical ‘League’ of imaginary friends. Hamelin’s playing bring this material to life on the stage of imagination.

The apparent potpourri of Carnaval’s one-minute compositions is held together by a four-note motif and the irresistible flavours of street music that look back to the bell canto of Bellini and forward to the rags of Scott Joplin and William Bolcom, the salon music of Paolo Tosti, and the music-hall operas of Kurt Weill. Schumann’s rich mix enchants and fascinates as Hamelin makes it skylark to lyrical heights and march in grotesque parades of figures whose skulls grin out beneath the flesh.

After intermission Stefan Wolpe’s Passacaglia Op. 23 (1936/1971) showed Hamelin’s comfort with barely melodic atonal advanced serial technique writing. These variations on 11 all-interval basic rows over a bass ostinato sample the chaos that lives on the borders of order: it takes a lot of listening to feel the inherent musical unity. Hamelin’s fearless account opened that door.

The two concluding works were sublimely melodic, one serene and the other tempestuous: together they underlined the unity of Hamelin’s well-crafted program. Gabriel Fauré’s Nocturne No.6 in D-flat Op. 63 (1894) has a straight-forward argument in four parts. The first is a wistfully coloured line of melancholy tones that flows easily into the second part’s bucolic mood like a Jean Renoir film with Edith Piaf singing “When the World was Young.” The third part is an even more flowing Debussyesque 10-note arpeggio that ripples into a concluding song that recalls Paulo Tosti’s Pierrot singing of “How many tears it takes to make a gay Pierrot.”

Hamelin includes a nod to Franz Liszt’s bicentenary with Réminiscences de Norma, S. 394 (1841). These are seven arias from Bellini’s opera Norma (1831) that Liszt arranged as an elaborate fantasie for solo piano. The music is grandly, deeply, melodramatic and embellished with advanced techniques that Hamelin handles with a care for the beauty and correctness of tone.  It’s always nice when a performance is so powerful the audience is compelled to curb its enthusiasm to applaud for a respectful interval. That’s what happened, and then the audience let loose, long and strong, and earned two encores.

The War of the Worlds is presented in association with Harbourfront Centre’s World Stage.