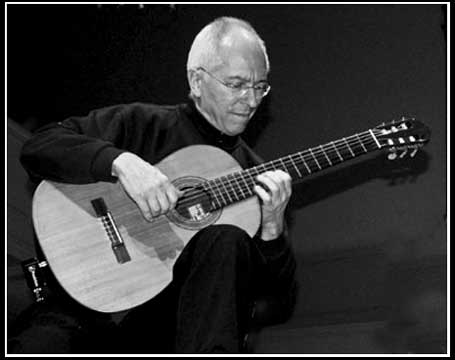 Listening to John Williams play the music of Villa Lobos with his guitar pressed to his heart is like roaming the halls of Versailles: one becomes part of the magnificence.

Williams plays the opening notes of 5 Preludios, A.419 with just the sprinkling of vibrato he needs to show his personal emotion and his control. His technical perfection appears in the living sound of his Smallman guitar whose richness and delicacy of tone he never mars with string-slides. Williams moves without apparent effort along enchanting melodic lines, through the blinding arpeggios of the second Preludio, down the slower, darker progressions of the  third into the dramatic fourth that balances the dark bass notes from his thumb against the fingers’ crystalline harmonics and finely graded glissandos.

Following this rich, Romantic, canvas, Williams sketches a Chaconne by François Couperin that proceeds at a dignified pace like the train of a veiled doncella flowing over marble stairs. Three portraits from El decameron negro by the modern Cuban  Leo Brower (b. 1939–) come next. “El…guerrero [the warrior]” is executed with cross-hatched strokes, dense amelodic runs, swellings and broad textured swaths of sound. The dramatic melody of “La hueda de los amantess…[flight of lovers]” moves against a slow, chromatic ostinato baseline, and disintegrates into flights of arpeggiated figures and blinding flurries of voices that call out to each other. The third portrait, of a lady in love, sensuous, languid and energetic by nature, sings through the guitar’s voice about the rich, unutterable complexity of feeling that possesses her.

The program after intermission was even more personal. Williams offered some anecdotes of his late friend, the African guitarist Francis Bebey, three songs from a self-produced album of Williams’ own compositions From a Bird, and a tribute to Bebe. Attractive, colourful music, rhythmic, complex in structure and playfully virtuosic.

Williams devoted the rest of the set to seven short compositions by Agustin Barrios Mangoré (1885-1944), the Paraguayan composer whom Williams continues to champion as the outstanding guitarist/composer of his time. Barrios’ music reflects the strength of the classics: Bach, Beethoven, Schubert, Chopin, live in his pieces for guitar. Williams executes La Cathedral, Julia Florida, a pair of waltzes and Un sueño en la floresta with impressive displays of musicality as his thumb picks out arpeggio patterns and his fingers make waves of repeated notes that roll like a silken standard in the wind.

In his seventieth year, John Williams continues to be the “foremost ambassador of the guitar”. He is faster than ever in his fingerwork and unhindered in his way of joining dignity and enthusiasm in his playing. I would love a second close encounter in this setting with this John Williams next year.