Posted on March 8, 2012 by Stanley Fefferman 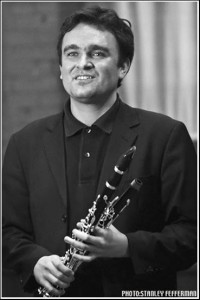 To judge by the size and enthusiasm of audiences, this TSO New Creations Festival curated by composer-conductor Peter Eötvös has been a SMASH. Eötvös conducted two of his own compositions in this final concert, both of which literally had smashing sonics in abundance. TSO Music Director Peter Oundjian conducted two quieter works: the Canadian classic-in-the-making Orion by Claude Vivier, and Jorg Widmann as soloist in his own Elegie for Clarinet and Orchestra, the evening’s most musical offering.

Widmann spins out otherworldly textures for soloist and orchestra from singable melodic lines. The Elegie opens with a clarinet note sustained long enough to make you think about circular breathing. It develops into a passionate descending scale that merges with the voices of celeste and hints, whispers and innuendos of orchestral song. Oddly extended clarinet timbres dissolve into violin voices that run against an orchestra buzzing with the rhythmic vibrations of insects on a summer afternoon as if orchestrated by Debussy. 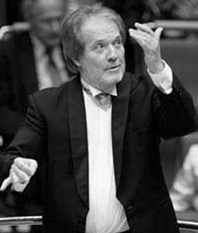 The motto Peter Eötvös adopted for his Cello Concerto Grosso (of which the TSO is one of five commissioners) is “Turning the Unbelievable into Music.” This 27-minute work in three unbroken movements features TSO principal cellist Joseph Johnson presenting the virtuoso aspects with the entire cello section as co-soloists in the Baroque manner. It is energetic, dance-like, and sparkles with instrumental techniques of Transylvanian folk music such as the ‘Bartok pizzicato’—the crack of wooden bows struck col legion against the violin.

The opening timbres are dramatic, like the grating crackle of stressed metal giving way, made ominous by low register sighs of oboe and flute extenuated by the horns. A bravura trumpet obligatto with tinking metal percussion introduces the querulous stammering of cellos descending and rising in scalar waves darkened by trombones and the thunder of war-drums like Sauron’s Orcs on the move.

The second movement features more marching songs, slow keening of the soloists and glass-shattering percussion, with soloists and orchestra not exactly imitating each other but setting each other vibrating in sympathy. The third movement develops an eerie, Kafkaesque atmosphere, an access of paranoia into nameless dread. The rhythms hint at the fugitive locomotion characteristic of Shostakovich—where a mood of mockery develops into a crazy, defiant burlesque. Huge applause.  Eovtos described the mission of this work as  “The Enchantment of the Listener through Sound.” Mission accomplished.

Peter Eötvös also conducted his 10 minute work, Zero Point, honouring the arrival of the millennium. It is a sonically witty work in which tectonic shifting of large orchestral masses result in upheaval and settling into new forms. Peter Oundjian conducted Orion by the late Claude Vivier,  a gorgeous work blending the peaceful expansion of Balinese Gamelon gongs with the excited rush and blare of downtown traffic, exotic animal cries and cosmic whispers swelling in an orchestral richness.