Posted on February 25, 2012 by Stanley Fefferman 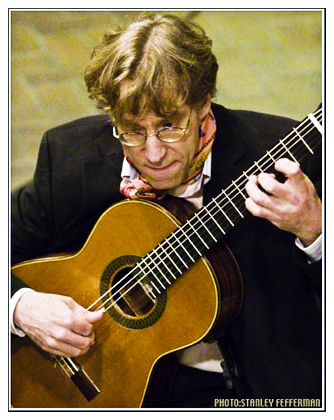 Seven years ago, Eliot Fisk played his guitar in Toronto as part of Mayumi Seiler’s chamber ensemble, Via Salzburg.  I wrote that “Mr. Fisk’s playing over the ensemble was mesmerizing, like water dripping from a rock into a forest pool on an autumn day when the breeze is redolent with birdsong and the rustle of leaves.”

Last evening, Mr. Fisk sat alone, centre-stage in a great hall, and gave a virtuoso performance, mostly from memory, and again the word that came to mind was “mesmerizing.” Though he seemed a bit ahead of himself as he warmed up on Barrios Mangoré’s exquisite Vals #3, the effect of the music was to seemingly suspend time.

Domenico Scarlatti’s stately Sonatas for Guitar (transcribed by Fisk) are complex, harpsichordic, passionate works,  marked vivo, presto and allegro, with blindingly fast passages balanced by emphatic, ostinato baselines. Yet Mr. Fisk’s playing reminds us that the guitar is a quiet instrument, and the excitement a virtuoso performance generates somehow immerses the listener into a steady state of tranquility.

Something similar may be said for his own arrangement of the familiar Ciaccona, BWV 1004, by J. S. Bach, that may be the single most difficult piece in the classical guitar repertoire. This performance showcased the flamboyant and bravura aspects of Mr. Fisk’s genius. His daredevil tempos sparkled, slurred occasionally, but the point of the performance was not the show. The point was the intense drama of Bach’s struggle that pitted his art against grief on the sudden death of his first wife.

The drama of death and celebration in music continued after intermission with Ein kleines Requiem, Op. 97 by Kurt Schwertsik (1935-).  Fisk collaborated for nearly a decade with the composer in assembling this 18 movement structure which he played in its entirety, from the score.

This feast of music concluded with a succession of desserts and heady digestifs: the soft and enchanting Granada, by Albeniz; 4 Caprices transcribed by Fisk from Paganini’s dazzling Op.1 for Solo Violin, a work so difficult it was for many years considered unplayable by anyone except the composer; and encores including a dedication to the late guitarist Aaron Brock of Toronto (1974-2006).