Posted on February 23, 2012 by Stanley Fefferman 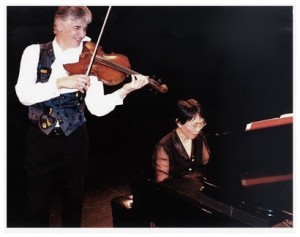 This wonderful afternoon of music with Roger Chase and Michiko Otaki was much about the viola and about certain English Composers of the late-romantic period.

I really like Frederick Delius’ Sonata No. 3. And I like these stories about the composer. When Delius was a boy he asked his parents for a violin. They got him one, the story goes, “just to show he could not play without learning how, as he insisted he could.” Little Fritz surprised them by playing a tune on it at once.

By the winter of 1929-30, when Delius was composing his Third Sonata, disease had him completely paralyzed and totally blind. But he had attracted the devotion of Eric Fenby, who was able to take the score down from Delius’ dictation.

Originally scored for violin and piano, this exquisite work was arranged for viola by the renowned British violist Lionel Tetris (1876-1975) who devoted his life to developing a repertoire of masterful chamber-works for the viola. Delius’ Third Sonata was performed this afternoon by violist, Roger Chase, on Tetris’ legendary Montagnana viola.

The opening bars of Otaki’s piano evoke a folky, bluesy feeling like Gershwin’s Porgy and Bess. This feeling rises and soars in the viola with a charming elegance that rivals Ravel. The music also moves with an easy, almost jazzy lovers’ walk-and-talk-in-the-country tempo with, as Rogers Chase mentioned, touches of mystical chording that predates Messaien by two decades. In Delius’ work there is a sunny glow, the  supple humour of Mancini, the highland folk inflections of Percy Grainger, all of these passionate, but fading into a sad, valedictory resonance peculiar to the Delius and to the viola.

John Ireland’s Sonata No. 2 in A Minor (transcribed for viola by Lionel Tetris) was composed and premiered in London during the “Great War (1914-18),” and brought the composer instant and lasting success. The opening motif—two phrases of three notes—is sounded in the piano, repeated sombre and richly in the viola, and reiterates throughout a beautifully crafted, lyrical structure.  Chase’s bold vibrato limns John Ireland’s wealth of musical ideas, many of them brooding and discordant, which Otaki’s piano maintains in perfect perspective. The dark-hued turbulence of the viola resolves into a final radiance.

The sole work on the program actually written for the viola is Melody for the C string No. 2 in F Major by York Bowen (1884-1961). This is a romantic melody pitched to show the splendour of the viola’s lowest register. Bowen, a pianist once thought of as the  English Rachmaninov, is being rediscovered as a fine composer whom Tetris encouraged to write for the viola.

After intermission—the classical masters, Bach and Brahms. The sense of adventure we had discovering the surprising beauty of lesser-known works was replaced by the pleasures of assurance. Roger Chase displayed his virtuosity in Bach’s Chromatic Fantasia in D Minor for piano, BMV 903(arranged for viola solo by Zoltan Kodaly). The piece astonishes as it moves from what sounds like an exercise in scales into the sublime.

The familiar themes of Brahm’s Sonata No. 2. in A Major for violin and piano were  rearranged for viola by Roger Chase himself. By this performance we are reminded of how we can repose in the classical clarity and uncontrived charm that are the virtues of melodies composed by the greatest masters of music.