Posted on February 9, 2012 by Stanley Fefferman 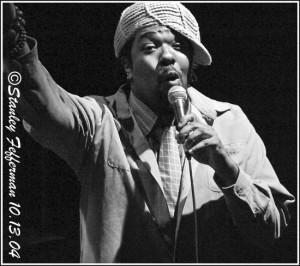 At his first two shows in Toronto at the Senator in early 2004, DK  came on with upbeat, happy, swing standards that he put across relying mainly on the richness of his undeniable vocal gift, and on a kind of cheery attitude. That was the year Madeleine Peyroux released Careless Love, the late Lhasa De Sala’s The Living Road came out, and Michael Kaeshammer recorded his hit album Strut.

By the time of his third Toronto performance, in  October 2004, Ibomeka had become a contender. His repetoire had deepened into torchy ballads  and showed DK in full flight as a soul singer. He didn’t just sing: he got right into the song, fearlessly soaring or plunging into emotional swells, portrayed without inhibition in his facial and bodily gestures. His vocal dynamics showed great control, especially as he glided into quiet passages. 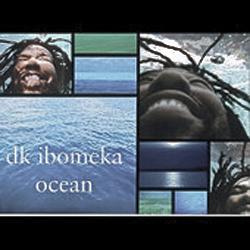 Last night at Hugh’s room, DK celebrated the release of Ocean, his third CD.  With the ease of a seasoned performer he treated the hometown crowd to songs new and old strung on an endearing storyline of his misadventures as a newbie New Yorker. He handled his voice like a lion-tamer, suggesting its power through delicate moves and subtle changes. George Koller on bass and Kevin Barrett on guitars gave DK the kind of backing that made the songs sound like chamber-music with cadenzas for the soloists to earn their own applause.

DK acknowledged Black History Month and honoured the late Etta James by singing her ’60’s hit, “At Last.” He closed the first set with two songs by Leonard Cohen: “I’m Your Man,” (which DK recorded on his 2008 album of soul and pop classics), and “Halleluljah” which he will record shortly and offer as a downloadable bonus track for patrons of his new album, Ocean.

There was serious soul in DK’s covers of Cohen and Etta James. Really big songs are the kind of vehicle he needs to display his power. The originals he co-wrote and sang from Ocean, not so much. He sings about love that makes him feel high, feel good, and feel down. The arrangements are extremely interesting, DK’s vocal gifts are showcased with style and grace, but the songs he sang in the first set didn’t mean much to me—not enough room in them for DK’s huge soul-power.