Posted on February 3, 2012 by Stanley Fefferman 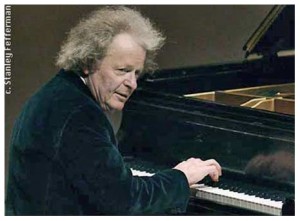 Good old Günther Herbig! The TSO’S Conductor Emeritus (1988-94) knows how to get his old orchestra around the acoustic limitations of this sound-swallowing hall. He moulded the TSO’s reading of Shostakovich’s 10th Symphony to match the steamroller orchestral/conductor combination of his mentor Von Karajan and the Berlin Philharmonic.

The Hall swallowed the excitement of the three orchestral chords and soloist Anton Kuerti’s delicate cadenzas that open Beethoven’s sublime 5th Piano Concerto. Not until the first violin solo, a few minutes in, underscored by Herbig’s use of the winds and the grounding vibrations of the double-bass section, did the performance begin to hit its stride. Kuerti’s crystalline figurations flowed through the contrapuntal material of the first two themes, through the rivetting buzz of the viola section, into the piano’s triumphant third solo.

From that point onward, the whole performance had a trustworthy feeling. The contemplative pizzicato of strings in the Adagio buoyed up Kuerti’s crisp touch on the minimalist, staccato passages in a comforting way. The Rondo— a happy dance of pure melodies, found fulfillment in a quiet mood. Animated by a timpanic heartbeat, the feeling of peace blossomed into a final, majestic glow.

Whether or not Shostakovich’s 1953 Symphony is a satirical reflection on the Stalin years, the best point of departure is to understand that the music will still be around long after the tyrant is forgotten.

What counts in this work are the intuitions we get of vast, brooding Russian steppes,  the surrealistic vision of peasants dancing like Chagall figures in the skies above them; the dark Mahlerian chorales of mourning; the locomotive rumble of Industry, the jeering winds, the snarling brass, the marching booted armies, their whirling, drunken, celebrations. And holding this epic panorama together like beads on a string is the four-note theme D-E flat-C-B (which represents DSCH, the composer’s musical signature), saying over and over, I Am Here! I Am STILL Here!

This is a work of astonishing invention within a predominantly gloomy mood. Tonight’s performance, so masterfully conducted by Herbig, brought out the contribution of the many orchestral soloists who reinforce the impression that the individual voice can always hope to be heard above the collective.

The work opens with a clarinet solo by Joaquin Valdepeñas, whose voice is heard frequently. Outstanding contributions were made by the individual voices of the flute–Nora Shulman, the piccolo–Camille Watts, the oboe–Sara Jeffrey, the horn–Neil Deland, the timpani, the trumpet–Andrew McCandless, and the first violin–Mark Skazinetsky.