Bartok’s The Miraculous Mandarin @ The TSO reviewed by Stanley Fefferman

Posted on January 26, 2012 by Stanley Fefferman 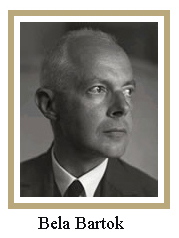 You can get an insight into the contoversial flavour of Bartok’s The Miraculous Mandarin by merely looking over it’s performance history. Bartok wrote it as a stage pantomine score in 1919, just after World War I. The stage version was banned in Hungary until after World War II. Meanwhile, in 1927, Bartok came up with a truncated orchestral suite that was performed in Germany and the USA in 1927.

The story is a ‘nasty tale of urban depravity.’ A prostitute is forced by three thugs to dance in a window to decoy suckers from the street to a room where they would be robbed. After attracting two penniless marks who are run off, she gets a rich Chinese tourist (The Mandarin). The thugs rob, suffocate and finally and stab him but… …miraculously, he won’t bleed out and die until the girl allows him to satisfy his desires.

The drama is Expressionist and the score is extremely bold, even for Bartok, as the music portrays a succession of brutal scenarios employing a palette of colourful  and bizarrely extended techniques. It’s the music of eerily kinky sex.

Guest conductor James Gaffigan chose well in offering Bartok’s full, original score. His inclination towards loudness and high contrast worked well in defining this complex, difficult but engaging music. The opening depiction of the ‘asphalt jungle’— rushing tidal scales in the strings punctuated by traffic with  brass fanfare car horns—was like a shot of vitamins. Gaffigan’s musical story-telling was refreshingly clear. Joaquin Valdepeñas on clarinet as the voice of the seductive girl was outstanding.

Andrew McCandless, Principal Trumpet, though fluish, gave a charming introduction to Haydn’s Trumpet Concerto in E flat major which was written for the newly invented keyed trumpet, and therefore could play chromatically throughout its entire range including the low registers. The lyrical opening theme resembles the “Deutschlandlied” which Haydn composed about the same time in the late 1790’s. McCandless managed both the spectacular cadenza and the soothing Andante very well.

Gaffigan’s inclination toward loudness disappointed in the opening measures of the theme of Brahms Variations on a Theme by Joseph Haydn and in the first variation both of which could have been played more gently, with less contrast. On the upside, his reading of the fifth and sixth variations gave an energetic Beethovenian sweep to the music. This grandiosity worked well in the contrapuntal imitations of the finale.