Posted on January 21, 2012 by Stanley Fefferman 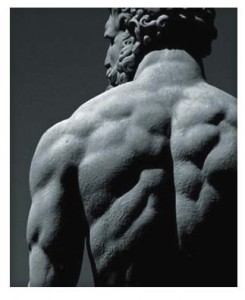 If General Romeo Dallaire had written the libretto for an opera composed by Ana Sokolovic, it might have paralleled the message that Handel’s Hercules has for our times. The message is: even the victors in a prolonged war are crippled and eventually destroyed by post-traumatic stress.

Handel’s work is based on a play by Sophocles, who put his wartime experience commanding troops into The Women of Trachis. The basic concept is that Hercules, victorious in battle, cannot adapt to domestic life at home with his wife Dejaneira,  their son, Hylus, and the beautiful captive Iole. Failures to communicate brew a venomous atmosphere of jealousy that is only neutralized by the death of Hercules.

Peter Sellars recently staged Hercules in Chicago as a full-scale opera with an American soldier in combat gear just returned home from the Middle East in the title role. Iole was costumed in the hooded orange jump suit of a prisoner in Abu Ghraib. And talk about timely, director Atom Egoyan’s Cruel and Tender, an adaptation of Sophocles’s Women of Trachis by contemporary British playwright Martin Crimp is making its North American debut at Canadian Stage in Toronto tonight.

Tafelmusik and Opera Atelier take a modified approach towards staging and timeliness. Handel originally staged Hercules for the concert hall as a secular Oratorio, uncostumed, with most of the action taking place off-stage. Our current production presents the work for the concert stage but incorporates elements from the opera theatre to heighten the dramatic force while still keeping focus on the music.

Jean Lamon, celebrating her 30th year as Music Director, conducted both orchestra and choir from the podium with and without her violin. Like a trousered Captain Nemo, Ms. Lamon took the audience aboard the great ship Tafelmusik and firmly guided the escape from our times into the realm of the Baroque. Submerged in plangent harmonies of this peerless period Orchestra and Choir, we luxuriated in Handel’s soothing flow embroidered with tantalizing subtleties.

Opera Atelier co-artistic directors Marshall Pynkoski and Jeannette Lajeunesse Zingg created for the principals and dancers a palette of movement, gesture, and costume stylized to take us away from today, into an archaic world where raw passion and the pain of  dramatic situations are contained by the grace of art.

The dramatic centre is Dejanira the wife of Hercules who in Act I is anxious that her husband may never return alive from a war. When he returns in Act II with the young, beautiful girl-captive Iole by his side, Dejanira veers into a jealous rage,  then forgives him, but in Act III is accidentally the cause of his gruesome murder. Allyson McHardy is an awesome Dejanira: endowed with a rich and agile mezzo, the wildly shifting moods she portrays become believable onstage.

I was taken by the bright tenor and easy way with melody of Colin Balzer’s Hyllus (son of Hercules), though he looked older and larger than his identically costumed father, baritone Sumner Thompson, whose part is rather small, though he produced some beautiful runs. Soprano Nathalie Paulin sang a lovely, focused, captive princess Iöle. Mezzo Laura Pudwell, in a trouser-role as the herald Lichas  who is always commenting and never participates— has a strong sense of line, a distinctive sounding voice and bearing, but in places seems overbearing.

Bottom line: Post-traumatic stress not-withstanding, Jealousy and Revenge do their work on any stage in any age.