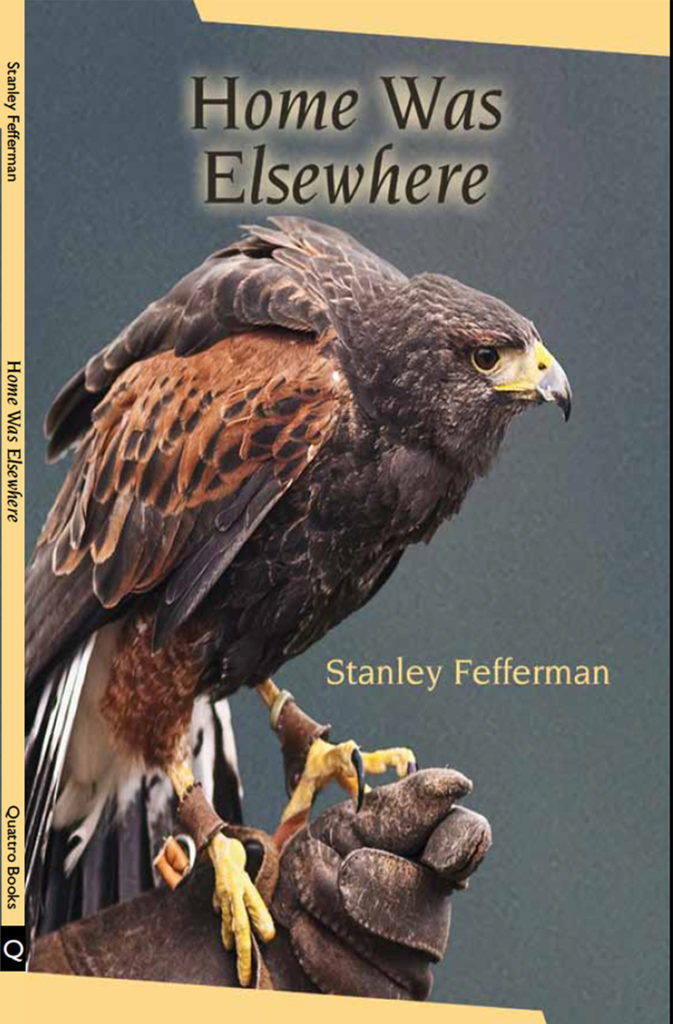 After reading Home Was Elsewhere,  Stanley Fefferman’s debut book of poetry, the only question is why did he wait so long to invite us into his garden. The poems act as stepping stones leading us into and out of the passions of his lifetime:

I love her mostly in the morning

from Chattaqua to El Dorado

In these poems about various lovers, Fefferman lends us his eyes to see what he sees “age has softened her as ivory/…she lies like a desert blooming/…yearning to mingle with the sky”. We travel with him across a continent El Dorado, Taos. Cheyenne, Boulder then the Bain Coop Toronto and Caledon Hills. With him we pass two wives, three children, dancing in the moment that knows only the past. “I want you to understand/star-crossed lovers are the only kind./Love is out of this world”.

From a failed affair in “No Consolation” to “Her”, the lover playing with distances, Fefferman plucks the flowers and hands them to us “your body curled under me/like calligraphies of smoke” and “… I found the strength to stand up holding you/ a large womanwith my cock in your body”. And there is the woman who provides continuity in his life “without you here the magpies’ chatter seems significant”.

Nature is the room in which the poet contemplates his lovers

The changing shape of earth provokes me to return

Your constant love. Even as I write

the snow has stopped and you appear this time

in a rock shaped like a huge woodchuck lurching

He will appear like the songbirds in his garden “at your command/which in my ears is song”. The sun is a guru:

Who can rival the sun

when with one wiggle of his fat finger

a million flowers open themselves

and when he shows his winter face

a million teardrops dressed in lace

parachute into the city

Fefferman takes us where we all have been and shows it to us for the first time. His longing is “like a question not born into words”.

The earth is big enough to be his lover and each lover connects him to the earth. One, however is “the cricket song” that brings “some kind of continuity in my life/a thread running like a stallion/through the patchwork of perceptions/as these eyes ears noses tongues bodies minds/unfold our world:

The bird of mind flits from branch to branch

You are steady as the rooted spruce

The tree of mind clings to dark delusions of earth

But all is not bliss. “The lord of the feast rules an ocean of pain, worlds growing apart, parting sadder than death, yet sadness is celebration and death is pregnant with sunlight”.

The union of opposites, what ancients called the hieros gamos, the union with one’s lost half-soul or twin, is sought by many lovers married or not. In fact, in the individualistic, narcissistic culture of white, western Europeans and their descendants , it is often pursued outside marriage because marriage is not seen as sacred compared to union with the lost lover. The danger is of falling in love not with one’s missing half but with oneself projected onto the other, living through the other instead of actualizing oneself. The search isn’t over till the Hieros Gamos is experienced. For some the search is itself a Hieros Gamos.

Traditionally, the Hieros Gamos was a sacred ritual union of the chief god and goddess living through the king and queen resulting in the renewal of the land. There is both sacrifice and satisfaction, sacrifice of ego and satisfaction in transcending the one to become one with the other and with everything. But it must be the “right” one and therein lies the tale of everyone from medieval knights to the playboys of the western world.

The Hieros Gamos is not found seeking a hormone boost for writing. It must be a genuine opening to the human other who leads us into an archetype not a lover-stereotype.

The “map” often turns into a maze with false starts, wrong turns and the temptation to give up and settle for whatever turns up next. To find one’s twin is to recognize one’s incompleteness and the “one” standing in for the “All” leads beyond selfish pursuits. It is a plunge the ego is loathe to make.

Home was Elsewhere joins the canon of love poetry and shows the joys and sorrows of this search and its various achievements and disappointments. Ultimately, the search continues until death, the final archetype, leads us to where “thoughts dissolve easily” in a “cave…full of butterflies”.

More information and Available for purchase at

Sharon Goodier is a Toronto poet. She has a degree in Theology and taught Religion and Special Education for the Toronto Catholic School Board. Prior to that, she worked for CBC on the radio program Sunday Morning and the Education Department of the Canadian Labour. She attends Bathurst United Church where she is involved with outreach at CAMH and The Yellow Door.  She is co-founder of a soon-to-emerge online poetry magazine Change Artists and is a volunteer researcher for the multi-agency group Commitment to Community.