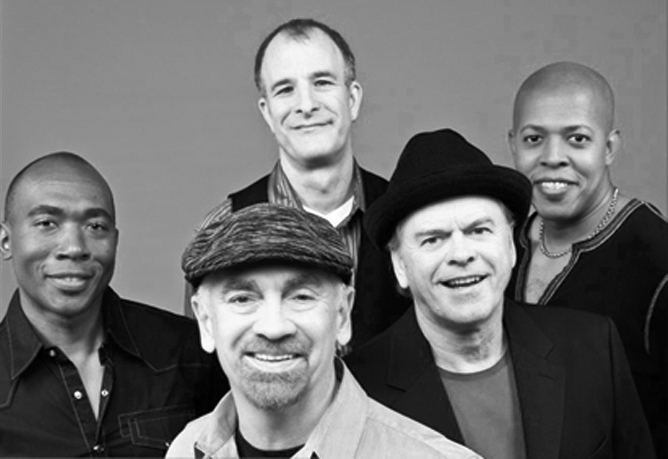 Surprised—(well, maybe not)—how much I enjoyed Average White Band’s (AWB) show. It was a perfect summer night. Nearly  1000 eager, well over-fifty fans sitting in the tent with their beers,  and another 1000 hanging about Metro Square, peering into the tent, getting the show for free.

The  well-over-Average White Band did their legendary soul and funk ’70’s hit-list led by founding members Onnie McIntyre: Guitars, Vocals, and Alan Gorrie on Lead Vocals, Bass, Guitar. Gorrie, still hitting that falsetto gave us his funk masterpiece “The Jugglers” from the band’s 1973 debut CD Show Your Hand, which references the drug habit that killed co-founder Robbie McIntosh and nearly killed Gorrie himself . From that same first album we heard the Isley Brothers’ “Work To Do.” Gorrie got some fine harmonies going on “The Jugglers” with versatile new-guy Klyde Jones. 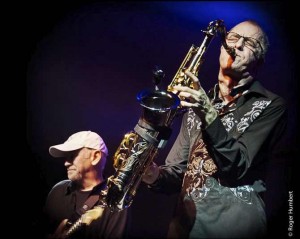 AWB’s music is so easy to listen to with its simple melody lines, blue harmonies and the danceable, rhythmic grooves outlined in Gorrie’s bass lines and riffs. The audience swayed and popped through the 1974 hits “Got the Love,” “I’m the One,” and “Person to Person,” as well as “A Love of Your Own” from Soul Searching (1976).

Their funky, syncopated grooves, the much repeated single message of each song—“I’m the one—(UNH)—that wants you,” or “Whatcha Gonna Do—(UNH)— For Me?” (Shine, 1980) tease, please, and ease the troubled mind.

The band went on hiatus in the early 80’s, reformed in ’89, and have been touring ever since. The current personnel also include: Klyde Jones: Lead Vocals, Guitar, Keyboards, Bass; Fred Vigdor: Saxophones, Keyboards, Vocals; Rocky Bryant: Drums and Percussion.

Thanks to Roger Humbert for the photo of Fred Vigdor and Onnie McIntyre.