Posted on October 25, 2013 by Stanley Fefferman 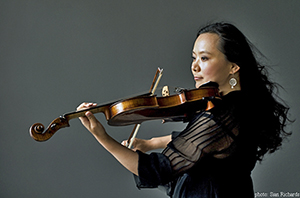 Esprit Orchestra, Canada’s only full scale orchestra devoted to new music, dedicated last night’s concert at Koerner Hall to the Ontario Arts Council that has donated over 2 million dollars to Esprit over the past 30 years.

This Shafer work was typically highlighted by acoutical-temperal-spatial hijinks. The orchestra’s tone of tuning  prolonged itself and swelled from the level of fly-buzz to the drone of enraged bees swarming that did not relent as conductor Alex Pauk entered, took a bow, and began conducting with vigorous gestures, to no effect at all for a while, then, seemingly on its own, the orchestra relented and fell in with the gestures of the conductor.

The body of the work is an array of sonorities developed by Shafer out of his recordings of urban noise pollution, Vancouver traffic in particular, whose graph-lines, sound-curves and band-withs provided inspiration for the orchestral flow of bells, chimes, whistles, tuba-blares and whoops, harp-ripples, and string scrapes that arose, shattered, subsided, faded, disintegrated and reconstituted themselves, sometimes at the signal of the conductor, and sometimes in apparent total disregard of the conductor, who abandoned his post, shaking his head in dismay, followed by the harpist and whole sections of the orchestra who left and returned several times to the applause of the audience until it began to sink in that we were listening to a reduced orchestra playing the next piece on the program, Claude Vivier’s Zipangu.

Originally commissioned by Robert Aitken’s New Music Concerts, Zipangu is scored for 13 strings, often bowing for the effect that Vivier called “granular sound,” obtained by exaggerated, heavy-handed bowing whose ‘colour’ increases noise almost to the point of drowning out pitch. Melody is there, or a sense of it anyway, derived from Eastern ideas but subjected to ordering like cells in serial music. The work has an atmosphere of mystery and the reverence that goes along with it, but on the flip side, it frequently presented as alien and ugly. I am not sure the decision to hook the Vivier as caboose onto the back of Shafer’s disappearing railroad blues train was the best one.

Sammy Mousa’s two pieces from 2009—commissioned by the Montreal Symphony Orchestra and dedicated to Kent Nagano—Gegenschein, study #3 for large orchestra, and Zodiaklicht, study #4 for large orchestra, struck me as studies of big sounds that erupt and are allowed to decay in fluid, itinerant, ambient streamings around the soundstage. Erupt, decay, regroup, and so on.

Compared to the Schnittke Viola Concerto (1985) that followed intermission, all the pieces in this first half of the program, to quote Bob Dylan,  “Looked so fine at first/But left looking just like a ghost.”

Schnittke’s work, while virtuousic and experimental, evokes emotions too intense for words. Teng-Li’s double-stopped opening solo evokes a solitary agony, and when the orchestra hums in behind her, you can feel the pain dissolve into loneliness that separates further into lyrical wistfulness, that itself sinks into brooding calm before the painful screams return. Throughout the work, Teng-Li’s executes the demands on her technique and extended techniques with remarkable clarity across the entire range of her instrument. Alex Pauk’s conducting (save an over-brightness of brass) brought out the pallette of orchestra colours, though the shapes and intensities of colour were more subdued than the benchmark readings recorded by dedicatee Yuri Bashmet under Rostropovich and Nobuko Imai under Lev Markiz.

I never cease to marvel how unfettered imagination married in a composer to authentic emotion, no matter how fearful, can by a skillful performance, send an audience into the street smiling.