Posted on October 18, 2013 by Stanley Fefferman 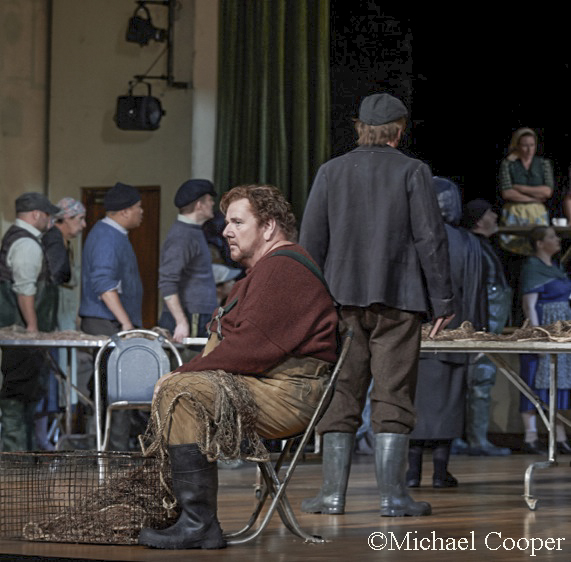 Ben Heppner is Peter Grimes, the eponymous dark star of Benjamin Britten’s folk epic, arguably the opera of our times. Grimes is dark because he is ‘the’ outsider in a tight community held together by a corporately managed view of its own respectability. He is dark also because despite his skill as a fisherman, he has not prospered enough to take a wife. He is without family connections, and first appears as the subject of an ‘inquest’ into the death of his apprentice. Though he is acquitted, suspicion of being an abuser of boys clings to him. When a second apprentice ‘accidentally’ dies, Grimes is forced to take his own life by drowning.

Britten finished his opera in 1945, as WWII was ending. It expresses a mood very like the one in The Outsider (1942) by Albert Camus. In both works, irrational conformist behaviour of a society is set in the balance with irrational violence by the ‘anti-hero.’ The resulting moral ambiguity is key to the mood known as Existentialism. Britten’s opera, as much as Camus’ novel, illuminates this ‘existential’ moral standoff which persists in our own time that has its own dark star ‘outsiders’ including Salman Rushdie, Edward Snowden, Julien Assange, and Malala Yousafzai.

Britten’s music is genius—apt for every scene and various enough to hold the mind for three hours. Conductor Johannes Debus brought it on brightly: the dissonant, semi-atonal harmonies of hypocrisy that claims kin with the sardonic music of Kurt Weill’s  Mahagonny and Die sieben Todsünden; the yearning lyricism and musical hall idioms that blend in tuneful figures of Lionel Bart’s Oliver;  the drama of Britten’s Suffolk SeaScapes, and the stunning brilliance with orchestration showcased in Britten’s  “Variations and Fugue on a Theme of Purcell,” better known as The Young Person’s Guide to the Orchestra.

Director Neil Armfield’s production restricts the action to a single but versatile set (designed by Ralph Meyers)–a village hall that looks like anyone’s high-school auditorium, with folding chairs and tables on a floor in front of a curtained proscenium arch-stage that sometimes serves brilliantly to bring in other dimensions such Grimes’ hut and the scene of the opera’s clinching fatality.

Tess Schofield’s costumes are brilliantly ‘ordinary’ setting off various characters and classes without calling attention to any except Heppner who alone clumps along in stained boots and work-clothes. Wendy Greenwood’s lighting is magical, often seeming to come in through auditorium windows that mirror weather changes in synch with shifts in the drama. The COC chorus, led by Sandra Horst, sing and act at the standard of power set by the score, the conductor, the orchestra and the cast.

Well-seated as I was in the acoustically gifted Four Seasons Hall, every singer sounded loud and clear and perfectly alive with character. The agony of Peter Grimes, his two victims, and his consoling fiancée is modified by the variously coloured voices of village ‘characters’: the cavernous post-menopausal depths of  Judith Christin’s instrument as the meddlesome Mrs. Sedley; Jill Grove’s robust and humane tavern-keeper, warm as a horn; her flutey flirtatious “nieces,” Claire de Sévigné and Danielle MacMillan. Roger Honeywell as Boles trumpeting  drunken, vengeful and loutish against Grimes; Tom Corbeil as Swallow the lawyer and Peter Barrett as Grime’s friend Ned Keene the apothecary were potent and ambiguous as bassoons.

Ben Heppner’s voice flows like a golden river that brings to life emotional landscapes of the imagination: tender yearning, blind ambition, relentless grasping, brutality, weakness, vulnerability, stubborness and resignation. He is elemental and unattractive, but by virtue of the love and friendship he attracts, and his failed desire to live like other people, Peter Grimes acheives the tragic grandeur of a small man setting himself against a large and largely hostile world. On this stage, Ben Heppner looms very large and burns brightly.