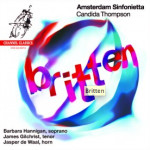 You might not think it, but Amsterdam Sinfonietta’s recording of two cycles for singers and string orchesta by Benjamin Britten, and his Variations on a Theme of Frank Bridge make very fine listening during long rides on the highway. I have taken this Channel Classics album along on three rides, and my interest is still growing.

A good on-board surround system plumbs the depths of this SACD recording where no road-noise goes. Conductor Candida Thompson’s approach is both subtle and bold, making the most of Britten’s penchant for the string orchestra.

The pieces are from the years Britten’s maturity germinated—1937-43. Each work, in its own way, is sublime and also dark. Les Illuminations explores in ten songs for soprano the ecstatic poetry of Arthur Rimbaud. Barbara Hannigan’s electrifying glissando slide in the third song, “Phrase,” bridges the antinomial expanse of the realm Britten is ‘illuminating.’ The work is “a wild parade” of passages hectic, sparkling, moody mad, absurd, tragic, pompous and sensual. Hannigan uses her fresh, perfectly pitched voice as though she has the key to them all.

The 10 ‘Variations’ based on a ‘Theme’ by Britten’s composition teacher Frank Bridge is also exhuberantly various in techniques, dynamics, colour and contrasting moods, moving now in mocking marchtime, waltzing undanceably and strutting à la bourree, or following a funereal parade. Thompson lends her ensemble a passionate intensity that I find tonic.

Poems by Tennyson, Blake, Keats, Jonson, bring the glory of English poetry to Britten’s Serenade, Op. 31 for tenor, horn and string orchestra, featuring tenor James Gilchrist and Jasper de Waal on horn. Britten’s skill in setting English verse is showcased by the flexible interpretations of James Gilchrist, long known for his work as soloist with Stephen Cleobury and the King’s College choral scholars. Jasper de Waal’s horn is sensitive to every adaptation of Gilchrist’s emotional range, and together they make the sensuality of Britten tangible.

As a bonus track, we have their densely concentrated duet of Tennyson’s time-lapse flowering “Now Sleeps the Crimson Petal.” 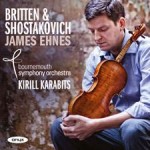 Britten was smitten by Shostakovich in 1960. It was arranged for them to share a box at the London premier of Shostakovich’s First Cello Concerto where Shostakovich witnessed  “Britten bobbing up and down like a school boy, even nudging him with happiness at the music.” On the reciprocal, Shostakovich has said: “ What attracts me to Britten?  The strength and sincerity of his talent, its surface simplicity and the intensity of its emotional effect.”

At hand is an Onyx recording of James Ehnes and the Bournemouth Symphony Orchestra under Kirill Karabits offering two violin concertos: Britten’s Violin Concerto Op. 15, and Shostakovich’s Violin Concerto No. 1, Op. 77. Both works compel attention by the melodic simplicity and obsessive momentum that Karabits and the Bournemouth sustain. In both there is an habitual yaw from consonance to dissonance and back as lyrical impulses yield to sardonic reflections. And both composers employ the reiterative eloquence of the baroque ‘passacaglia’ to reinforce the exceptional “strength and sincerity” of their music.

Ehnes follows the musical lines of both compositions like a pack of hounds on a rabbit. He does nothing that is not required and everything that is needed flows from impeccable technique and fearless musicality that respects the music and the broad humanity at its source. These performances are on fire: it’s hard to imagine where you are likely to find another burning brighter.