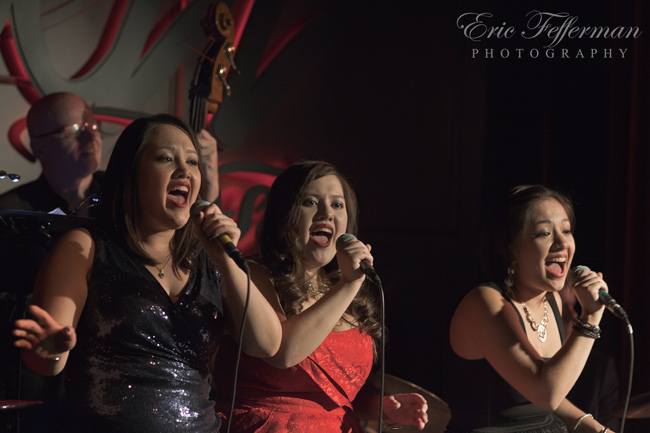 Music-lovers, friends and family packed the Jazz Bistro on Tuesday night.  Around the corner, at Yonge & Dundas Square, the audience was captivated by Space Balls playing on a massive screen, but inside the Bistro’s warm jazz den, our hearts were being captured by The Ault Sisters.  This young trio from Mississauga have been performing together since the long car rides to the cottage when they sang along to Nat King Cole’s rendition of “Stardust.”

Backing The Ault Sisters were the incredibly talented musicians: Robi Botos on piano, Goerge Koller on bass, and the always-smiling Ben Riley on drums.  Rounding out the band was the young women’s producer, Greg Kavanagh on guitar whose joy when listening to them sing was written all over his face.

The sisters opened the show with “The Boy from New York City,” arranged by Debbie Fleming who was in the audience to hear a number of her arrangements come to life. It was a nice introduction the style and feeling we’d be hearing from the stage. Before they sing a note, you can see that these are confident young women as they step onto the stage and take the reins from their band.

The set-list spanned the decades from “Stardust”, written in 1927, through standards including “Moon River” and “When I Fall in Love”, to the Beatles and Stevie Wonder, and even into new material written by Toronto musician Chris Smith. The sisters’ voices flow naturally from era to era, always bringing along an Andrew Sisters or McGuire Sisters vibe with them.

The constant throughout the performance is those beautiful voices which often sound like they are one voice on stage despite the unique qualities each of them possesses.  Alicia, the middle sister, has a solid strong voice capable of performing musical theatre. Amanda, the eldest is a York University graduate with a major in Classical Voice. Alanna—on stage the most reserved of the sisters, puts the raw emotion of a torch singer in her solos.

This sweet and genuine trio is at their best on slow and quiet songs that allow the audience to savour every note.  The up-tempo tunes such as Stevie Wonder’s “For Once In My Life,”( introduced to the sisters by their aunts), leave you straining your ears to catch those solid and captivating three-part harmonies.

The Ault Sisters will have a new album to share with us before their 9th annual Hugh’s Room Christmas matinee.  This is a vocal trio that is reaching maturity and finding a strong collective voice.