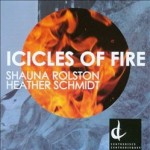 This CD has Heather Schmidt’s playing piano on three of the compositions she composed for cellist Shauna Rolston between 2003-07. Ms. Schmidt’s music has programmatic intent. To give you an idea of how her imagination can work, a few years ago I enjoyed her live performance of Lunar Reflections, a work built on the idea of five kinds of moon: a Blue (once in a while) Moon; a pink (April flowers) Moon; a dark hungry December Wolf Moon; a lovely February Snow Moon; and the Thunder Moon of July. Someone once wrote,” one can think readily of … beautiful things while listening to this music.”

Schmidt’s music also bears traces of her experience as composer for films, documentaries, and dance projects. The eponymous Icicles of Fire, for instance, was inspired in part by touring Iceland, and by the effect on her imagination of volcanoes active among glaciers there. Her writing has Neo-Romantic melodic traces blended with Minimalist repetion of obsessive motifs.  The first two, brief compositions here, Synchronicity and Fantasy for Cello and Piano are boldly repetitious, relying for interest on fluctuations of colour and rhythm, but happily, she is not stuck there.

Icicles of Fire in two contrasting movements starts dreamy, high in Rolston’s cello, with tinkly notes from the mid and high registers of Schmidt’s piano dotting it like raindrops falling on glass, or as her program notes would have it, like flickers of fire in ic(e)icles. Cello is ice, piano the fire.

The mood is eerie, Rolston’s cello sounding Chinese effects as the  intensity builds. I don’t get the program. My imagination is provoked but what I get from the Cello’s slow slither is a slug or wounded serpent threading its way randomly through vegetal castings of an utended autumn garden. Cello goes from eerie to weird, screetchy, abrasive, jagged and jerky bowing, staccatto and fast, propulsive, sliding and skittering, tettering, bouncing, careening, caroming at a kind of William Tell Overture pace. Schmidt mirrors Rolston with a perp mobile display of pianism that suggest running, so varied, it could be a lot of fun, especially as it offsets the  earlier obssessive preoccupation with ostinato. On another take what the music builds are metaphors of flight, a mood of panic you sometimes get in a Shostakovitch quartet. Whichever, Schmidt’s writing and the duo performance sustain momentum and interest all the way through.