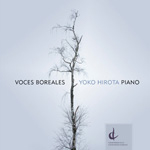 About a year ago, I had the pleasure of attending Yoko Hirota’s Small is Beautiful piano solo recital which included all five works by Canadian composers that she has recorded here for Centrediscs. I admire the sensitivity of Ms. Hirota’s touch, and the sinuosity of her flow.

As before, I heard Ms. Hirota weave the lyric sonorities of Sungods (2007) by Brian Current into a dense, lush, rhapsodic, tapestry. Shes uses the right amount of force to shape the rolling and percussive lines that catch the drama of Current’s work. This listening, I picked up on her excitement about the urban quality of the music, the bustle and drive of the city.

Robert Lemay composed the four-part Hiroshima Mon Amour (1998) as an homage to Alain Resnais’ 1959 film. The first part builds on the resounding C of the peace bell tolling repeatedly as dissonant splashes of disaster flutter and thud down on panicky beings.  The second mood is feminine–sparkly, lacy, light.  “Nevers,” the third section, recalls the opening moody mode. I appreciated the tender and attentive quality of Ms. Hirota’s playing here. In the fourth section things come apart and she picks the drama out on dampened strings.

Laurie Radford’s Rolling (1997) builds from an ostinato ‘chopsticks’ rhythm, adding pitches to a staccato morse code message gradually rolling into chords that engage the richness of the entire keyboard. Ms. Hirota seems to enjoy the challenging timing of this spartan, introverted piece, and manages to develop a variegated texture out of the deliberate monotony of the ruling motive.

Brian Cherney’s 14′ Nachtstüke: six miniatures for piano (2011) was written for her, as was was Trinomes (2011), François Morel’s first piano work in nearly 50 years. Ms. Hirota is imaginative and persuasive through the work’s opening gnarly grunts and shifting rhythms that evoke, without nostalgia, the crossed clotheslines of backyard balconies in wintery Old Montreal.

Yoko Hirota is an inquistive artist, with a flair for the eccentric, the quirky, the playful. I liked having a second go-round with her work on these pieces.