Longworth and Brahms play well together. This is Johannes Brahms, nearing the end of his composing life, his grand works behind him, condensing very personal thoughts into favourite forms for his piano. This is Peter Longworth, making his music personal after many distinguished years as accompanist and chamber player with the Duke Trio. Longworth and Brahms together on this disc make music that gets my imagination going to good and unexpected places.

The intimacy of Brahm’s writing seem to intensify Longworth’s habit of close observation and careful execution. His phrasing is tasteful, sensitive to subtle shifts in dynamics, tempo and rhythm—in a word, expressive. Beyond that, I hear Brahms exciting Longworth’s poetic impulse so that many of the pieces sound like songs without words from worlds not bounded by time.

Surprises start in the second one of the eight pieces in Klavierstucke, Op. 76. Longworth plays this bouncy ‘Capriccio’ with a light, tasteful humour that makes its chromatic passages sound almost French and, most strangely, almost like Ragtime. His playfulness extends to the following ‘Intermezzo’ but with a romantic touch. Longworth’s piano sounds the bell-tone pitches of a ballerina revolving on a music-box. There are thundering tides in the fifth ‘Capriccio’, oceanic eddies that seem to sing in rhyming stanzas like a Chopin Nocturne. The concluding ‘Capriccio’ builds to a bright burst of passion that’s repeatedly reined in and released, making a drama that makes me imagine Gershwin must have listened to this piece a lot.

Brahms composed Opus 116 and 117 after the death of his sister. He referred to them as the “Lullabies of my sorrow”. Longworth plays the opening A minor ‘Capriccio’ of Fantasien, Op.116 with great care to bring out all the graduated darks of Brahms’ mood. There is also a touch of melodrama in the urgent passages that future players chose to accompany silent-movie car chases. The second ‘Intermezzo’ is all air and water, pitches that toll and feather into space, followed by passages of rippling waves, all separated by teasing silences. The fourth is an ‘Intermezzo’, the most delicate of all the Fantasien. Longworth plays it with extended rests between the phrases. Out of these gaps float up from the piano a sequence of overtones; some of them sound like cocktail-piano jazz, some like romantic show-tunes by Llyod Weber, as if Brahms were prophesying some of the voices that would arise in the world after him.

Longworth’s judgement in shaping lines of the Drei Intermezzos Op. 117 is breathtaking. He links gnarly phrases of the richly harmonized second ‘Intermezzo’ into lines contoured like spinal columns that taper towards both ends. The third ‘Intermezzo’ is almost funereal. Its dark, resounding colours spread like ink on water-colour paper.  Longworth lightens it in the middle, raises it to a height of passion, and lets it finish sedately as a cat walking across a grave.

Laurie Shulman’s liner notes are excellent. Credit for the crystal quality of the recording goes to whoever decided to locate it in a good place— Koerner Hall. The expected thing would be for the management to invite Peter Longworth to play a solo concert there. Meanwhile, here is a photo of Peter playing at his CD release party at Rosemary Umetsu’s Studio. 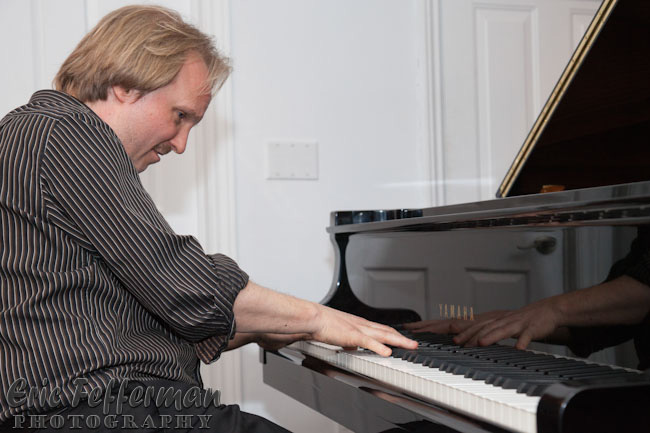 This entry was posted in CD Review and tagged Johannes Brahms, Peter Longworth. Bookmark the permalink.