Posted on March 7, 2013 by Stanley Fefferman 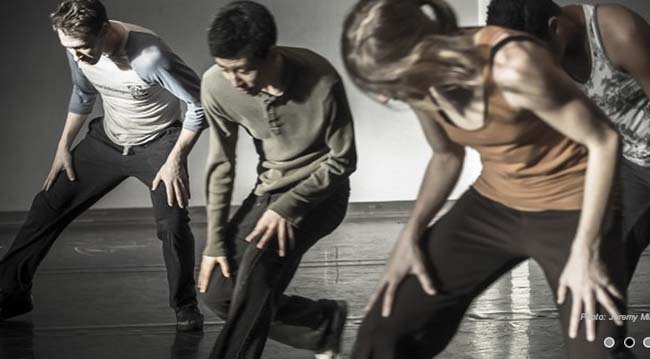 Choreographer Heidi Strauss had the idea to develop a dance based on stories told by dancers she worked with in a workshop—stories that came out of their bodies. One such story, told with awesome charm before it gets danced, is the drama of girl who got her perfect face chewed off by a mastiff. She said that it was, in a strange way, ”the best thing that ever happened to me.” At that point the light went on about why the unusual word ‘Anthems’ is in the title: it’s an homage to Leonard Cohen’s “Anthem” that goes: ”Forget your perfect offering/There is a crack, a crack in everything/That’s how the light gets in.”

The nine young dancers dressed in everyday clothes by Teresa Przyblylski often move like in a movie: sequences flow then freeze- frame, flow again, and freeze, framing attitudes in midflow, releasing, letting new partnerings develop, then freezing them for quick examination. A kind of scientific method of psychologizing dancespeak. Works brilliantly for the most part. Not so much when later into the hour repetitions become apparent.

Music by sound-designer Thomas Ryder Payne is a digitized palette of dark abstractions that play with natural sounds like bird-song, wind and thunder, but inclines more towards the timbres and propulsive rhythms of heavy industry. It works well with the sequences of Heidi Strauss’ choreography that have pairings and groupings of dancers running, leaping, lifting and lowering each other like living parts of a clockwork mechanism.

Sequences like the boy whose mother played music forbidden by the Chinese Cultural Revolution when he was in her belly, the lovers pas-de-deux, the solo, and the first male duet, were particularly affecting. My favourite, near the end, was the second part of the story told-while-dancing by the dog-bite girl.

Much credit to writing advisor Brendan Gill for crafting the narratives convincingly told by the dancers. As I write, images of the dances I liked come out of my body and flash on the laptop screen: that is the best recommendation I can give.