Art of Time’s “Gabriel Prokofiev: from Chamber to Electronica” reviewed by Stanley Fefferman

Posted on February 23, 2013 by Stanley Fefferman 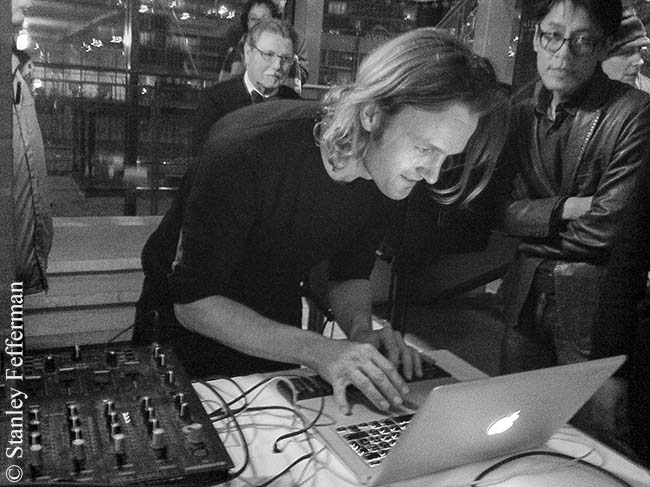 There was a time when classical music was popular. For 10 years, I have been listening to Art of Time musical director Andrew Burashko showing the way back to that time. Last night he did it again with a show focusing on the work of DJ/composer Gabriel Prokofiev.

Gabriel, well-known on the British scene for producing dance, “sonic art”, and African music under various aliases, was asked to write a “classical”piece in his own name for the Elysian Quartet. Hence, Prokofiev’s four movement, fourteen minute, String Quartet No.1 (2004). The writing is ‘neo-classical’ chamber music, but the recording not so much.

The Elysian Quartet’s four-movement recording is followed by five remixes by famous DJ’s including one by Prokofiev himself. Currently, Prokofiev produces “non-classical” concerts of chamber-music in night-clubs . At these clubs, instrumental sets are separated by DJ sets when clubbers get a drink and mingle and dance. Burashko used this “non-classical” format for last night’s production.

The String Quartet No.1 features Steven Dann’s viola singing a Russian-flavoured lament to the bouncy, squeaking beat of cello and violins. Melody and beat, arco and pizzicato, point and counterpoint, alternate among the instruments until these distinctions merge into a single groove. Listening to this lovely composition, the images that came to my mind were: an elephant relaxing into a mudhole, a gnat-cloud swarming in the sun above it, the citizens of Brigadoon folk-dancing to the drone of bagpipes while Gene Kelly watches them and their village dissolve into digital chaff. Prokofiev’s elegant grooves and distinctive colour-tones make for very chill music. His instant remix tweaked the beat, added flow and roll to the string sonics and gave them a gritty edge.

Thomas Wiebe, lone human and his cello, shared the stage with eight speakers arranged on chairs. They performed Outta Pulsor, the first movement of Prokofiev’s multipart nonet suite for cello and pre-recorded multi-tracked cellos. Wiebe’s virtuoso playing of the lovely, emotional theme weaves among the remix’s imitations, digitized twitterings, siren wails, slides, and low ostinato groans. The first remix has a mouth-harp boom-beat flavour. The second remix goes Carib. All through, the sections succeed one another logically, like the variations in a chamber-music composition.

I thought Prokofiev’s ‘Silente’: Dance for String Trio, Piano, Bass Clarinet and Scratch DJ, was brilliant. The melancholy story the strings tell—shrill in the violin, rich in viola, and droning in the voice of the cello, is punctuated by the ‘poop-poop’ of the bass clarinet, and frilled by the tinkle of the piano’s icy arpeggios. The tweedy hiss, crackle, squeak and squawk that Gabriel gets out of torturing the vinyl really speaks to the body.

This showcase of Gabriel’s work was framed by Jonathan Goldsmith’s Camera Obscura (2011), and two movements of Gavin Bryar’s Man-in-a Room, Gambling (1992). Goldsmith’s piece has a lovely movie-music pop vibe with a deeper, bluesy ‘takes a train to cry’ groove. Gabriel’s instant remix juiced up the sonics, gave a bob to the beat and brought out a kind of crazy Zappa humour. Bryar’s music performed by the Art of Time Ensemble Sextet and two recorded voices is an amusing lesson in cheating at cards.

The entire audience spilled into the Enwave’s lobby for the after-party with eats and drinks and DJ Gabriel at the laptop. The show repeats tonight, Saturday February  23. Not-to-be-missed. From Chamber to Electronica.