Posted on February 3, 2013 by Stanley Fefferman 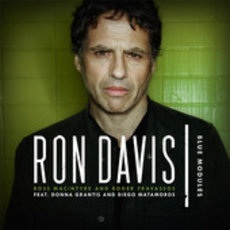 Blue Modules, the eighth album by pianist-composer Ron Davis is, in the words of Ornette Coleman, Something Else!!!! For the past 10 years, Davis has been recording a blend of styles. At the keyboard, Davis is a known stride player, in the tradition of James P. Johnson, Fats Waller and Art  Tatum. In his recordings, he used to like running that strictly jazz vibe through arrangements of classical pieces (Vaughn Williams’ “Rhosymedre”), or classic standards like Hoagy Charmichael’s “The Nearness of You” (slowed down to come across like Chopin), or Chronos Quartet-ish classical Klezmer jazz sounds ramped up-tempo and coming out like Aaron Copland’s Appalachian Spring. The blend always included a generous sprinkling of Davis’ original, high-textured compositions. What held these albums together was the free and unfettered spirit of Davis-the-jazz improviser having every kind of fun but always keeping track.

Blue Modules is funky. It’s less of a blend, more what Davis likes to call—”a seismic shift.” Blue Modules features Davis going from eclectic to electric and elastic, extending his pianistic fingerings to Fender Rhodes, keyboards, and for goodness sakes–celeste. And his setlist is very something else!!!with tunes like XTC’s “Making Plans for Nigel,” the invocation of Elvis by Doc Pomus and Mort Shuman’s “Viva Las Vegas,” Bill Wither’s “Grandma’s Hands,” a couple of Stevie Wonder tunes, a Jimi Hendrix, and a pair of Lennon & McCartneys. This is a list you might expect at a live concert that lines up Medeski, Martin, and Wood with John Scofield, or String Cheese Incident. If you want a touch of funky Euro-Muppet-pop there’s Piero Umiliani’s “Mahna Mahna,” and for those prone (or supine) to yogic chanting, there is “Patanjali’s Chant” featuring Donna Grantis on guitar, who is also featured on Davis’ own smooth and funky “Pawpwalk.”

Will you like Blue Modules? I played it in the car for the lead guitar-player of Caution Jam, one of Canada’s better jam-bands, and he really liked it. So I tested it on my system during three successive dinner parties, and everybody liked it. What else can I say? I keep it in the changer of my car system in a batch that currently includes the Preludes of Nicholas Kapustin, Duke Ellington and Johnny Hodges Play the Blues, and Klezmer Karma  by Roby Lakatos, just in case I want a dose of the latest Ron Davis.