Posted on November 19, 2012 by Stanley Fefferman 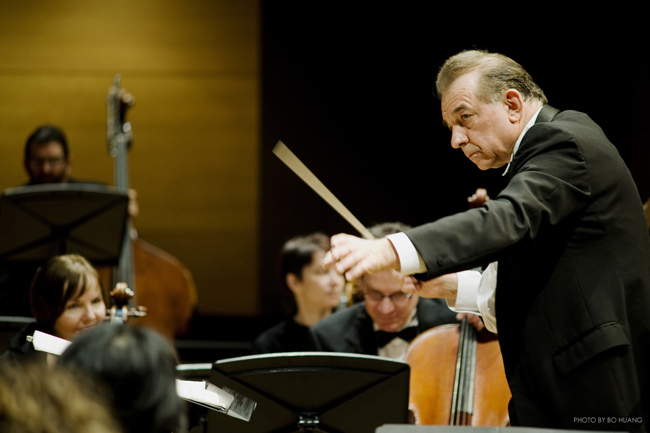 Esprit Orchestra’s performance of Chris Paul Harmon’s Cilla (2012) had some surprises in it.  Conductor Alex Pauk, both hands held up high  stood in front of his 50 plus players poised at their instruments, including two harps and two grand pianos, but nobody moved. Out of the stillness and silence came music over the superb speaker system: the lovely voice of Cilla Black doing Arthur Hamilton’s “Sing a Rainbow.” Eventually, the live orchestra members moved and merged their dissonant, staccato, fragmented sound with the lyrical flow of this recording( produced in 1953 by George Martin).

Cilla’s three movements are like this: recorded lyrics balanced against Harman’s melodies-stripped-of-melody, desaturated colours of eerie vibrations resonating rhythmically in the space. The ending is martial, loud, menacing—bold orchestral strokes tailing off into a long-held dissolve. Cilla’s technically ambitious orchestration possesses an elegant, ethereal beauty that  surprised, but was not very moving.

Robert Aitken showed his amazing chops in Marc-André Dalbavie’s Concerto for Flute and Orchestra (2006).  Aitken’s virtuosic ostinato chirpings of the opening arpeggios, pleasantly doubled by the orchestra, took off in a blistering bumblebee flight of trills ballasted by the brass. His sensitivity to delicate shifts of mood, and masterful breath-control in passages of fading notes and long-held notes was impressive. Alex Pauk on the podium kept a tight grip on the intermittently atonal orchestral atmospherics as the music bounced, echoed and shimmered between wistfully lyric Debusseyesque melodies and dramatic crescendos.

After a first intermission, we heard the premiere of a second commissioned work, Concerto Grosso (2011) by Bruce Mather. The principal soloist, Erica Goodman on Harp, was joined by concertmaster Stephen Sitarski (violin), Paul Widener (Cello), Colleen Cook (Clarinet), and Bardyl Gjevori (Horn). Mather describes his work as a dialogue between soloists playing quarter-tones and the orchestra playing semi-tones. My sense of it was a field of carefully stroked, flattened colours, and sonics redolent with a mildly middle-eastern flavour. I liked the humour in it, the Prokofievian sense of fantasy and caricature in the orchestral planes sliding around the high-pitched tintinabulations of Eric Goodman’s harp. Some parts seemed a bit sluggish and torpid, but that impression waned with the boldly extended final fade out.

After a second intermission, Alex Pauk conducted his own new work, Musique immergées (2011). It is a collaborative piece that merges layers of recorded environmental sounds—“rain, wind, waves, birdsong, fire, thunder,”— with electro-acoustic sounds and a mosaic of live, instrumental moments free of any deliberate narrative line. This evening’s performance also involved the collaboration of photographer Edward Burtynsky and film-maker John Price. Price took Burtynsky’s monumental images of ” nature transformed through industry”( ie. open pit mines in Sudbury), combined them with his own film of weather over the Lower Saint Lawrence River, and edited them into a visual abstraction on the theme of water. Pauk’s music flowed in dialogue with the hypnotic transformations of the visuals. Because the hall was darkened for the screening, I couldn’t see to note down my specific impressions of the piece. Obviously this is a thoughtful and provocative work, but one that immersed me in too many good things at once, and for that reason, the full feeling of pleasure escaped me.