Posted on November 15, 2012 by Stanley Fefferman 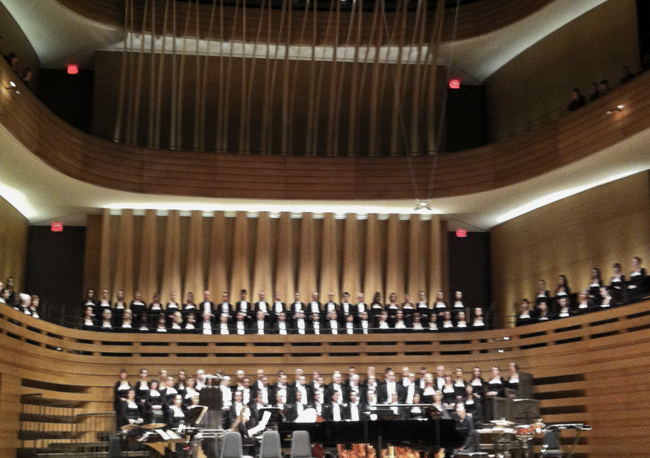 The raw power of Karl Orff’s popular masterpiece, Carmina Burana, made me ecstatic the first time I heard it on record quite a few years ago. Last night’s performance at Koerner Hall by the Toronto Mendelssohn choir brought back that thrill and then some.   Such was the punch the mighty Mendelssohn’s 120 voices delivered, that the famous opening, “O Fortuna,” lamenting how humans are constantly frustrated and  finessed by the fickle finger of fortune, sounded like a celebration. The TorQ quartet with two grand-pianists, James Bourne and Michel Ross, gave the accompaniment a startlingly Zen graphic black and white treatment that seemed more natural than the full orchestral palette the work is scored for.

The libretto ostensibly sung by monks in springtime, turns morality upside down, celebrates copulation, sleeping in, eating heavy food, drinking rich wine, and regularly playing dice. What fun! The Latin lyrics, sung staccato, have a natural crispness, like carved marble, that the choir’s excellent enunciation gave to my ear more pleasure than I usually get from an English libretto.

Michael Nyby’s baritone needed a few measures to warm up during his entrance with “Estuans interius (Burning Inside),” but rose to magnificence in his many songs, beginning with his solo “Ego sum abbas Cucaniensis (I am the abbot of Cockaigne).” Nyby impressed with “Wafna, wafna!quid fecisti sors turpassi (Woe! Woe! what have you done, vilest Fate?),” and “Circa mea pectora (In my heart).”

Tenor Christopher Mayell hammed brilliantly with the swan’s dying lament as he is being roasted on a spit with his gaze locked onto the bared teeth of the folks intending to eat him. Soprano Lesley Bouzas’ pure and vibrant soprano soars effortlessly in several songs burning with love, and raises the rafters with her high notes in “Dulcissime (Sweetest one).”

Conductor and artistic director Noel Edison shaped his choir to have maximum impact, visual as well as sonic on Koerner’s stage with Carmina Burana, and with the opening piece—contemporary British composer Jonathan Dove’s The Passing of the Year. Dove’s high-energy post-Minimalist vocal lines, ecstatic, shimmering and dissonant, present setting of seven poems by Blake, Dickinson, Peele, Nasche, and Tennyson that mark the seasons of the calendar, and the stages of life. Dove’s music is interesting, if not totally satisfying, partly because the words could break the surface of the swell of choral sound.

Associate conductor Matthew Otto had a hit with Whitacre’s Cloudburst. This 1992 work, written for for eight-part choir, with piano and percussion accompaniment, including choral a cappella sections and baritone solos,wittily models the passage of a thunderstorm. It was fun.