Posted on October 29, 2012 by Stanley Fefferman 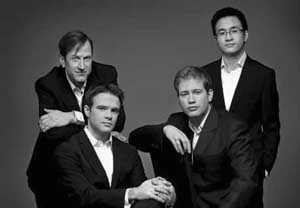 The New Orford String Quartet goes boldly. They chose a program of three works that open by disturbing the peace. Haydn’s Quartet in D Major, Op. 20. No. 4 (1772) with Andrew Wan in first chair, introduces itself cloaked in an ambiguous mood that a sonic outburst dominated by Brian Manker’s cello dispells. The movement continues to unfurl unexpectedly gnarly textures in which the cello’s part remains prominent. Given the already fast-paced and shifting sections of the development and quirky recapitulation, the New Orford’s tonal mixture seemed to me unusually rugged largely due to the forwardness of the cello’s dark colourings.

Haydn himself brings the cello part forward in the second variation of the meditative adagio giving it the high melody against the bass line played by Eric Nowlan’s viola. The cello gets an extended solo in the third movement’s trio: during the fleet, highly rhythmic finale you hear Mr. Manker function perfectly as timekeeper. My first impression of this ensemble founded in 2009 is that it is more like wholesome multigrain bread than cake, a good wool knit rather than silk.

A very interesting work followed: the early, experimental String Quartet No. 1, Op. 19 by the late Canadian Jacques Hétu (1938-2011). As Eric Nowlan pointed out, this work, commissioned in 1972 by the original Orford Quartet, opens with a dissonant, jarring chord (known as “The Devil’s Interval,” because it was banned from medieval church music). The movement is filled with violent, grating, tones and shifting rhythms that recall the sardonic locomotive lines of a Shostakovich quartet. The second movement, a quiet andante, is a minimalist flow of gentle harmonies: the long melodic lines of each player’s part reverberate off the others like sympathetic echoes. A nakedly emotional viola solo articulated by Eric Nowlan merges with Andrew Wan’s first violin part and dissolves into the undulating darkness of the ensemble’s closing tones.

After intermission, Jonathan Crow led a muscular interpretation of Beethoven’s String Quartet in E minor, Op. 59, No.2. The high contrast drama of the magisterial allegro suited the New Orford’s rugged style. Two penetrating chords cut an opening, succeeded by repeated abrupt silences, sweet, cut off melodies, and an energetic web of musical threads that extend towards a quiet ending. The idea for the adagio that follows is said to have occurred to Beethoven as he was “contemplating the starry sky and thinking of the music of the spheres”(Czerny).

The New Orford’s draggy pace here was redeemed by a lovely violin duet that melts into the flow of the second theme. After an eccentric third movement featuring Russian dance themes in homage to Beethoven’s patron Razumowsky, the finale gallops at high speed, pausing only for a lovely, lyrical solo by Jonathan Crow, toward a spectacular finish that brought the audience, without a second’s hesitation, cheering to its feet.