Posted on October 4, 2012 by Stanley Fefferman 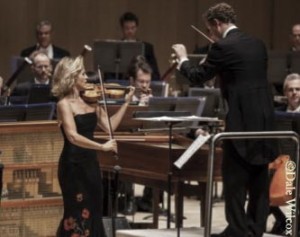 Anne-Sophie Mutter commanded the Roy Thomson Hall stage  by her presence.  She performed as soloist twice in the program she herself had selected. She chose Sophia Gubaidulina’s concerto “In Tempus Praesens” because it was commissioned for her; the Bach Violin Concerto No. 2 in E Major because Bach was Gubaidulina’s inspiration, and Beethoven’s 5th Symphony, which she sat out, because its transcending passion fit the bill.

The Bach concerto began as Ms. Mutter played the ritornello’s introductory bars in unison with the reduced TSO baroque ensemble that she led at an energetic tempo. Her violin solo emerges boldly, nuanced in dynamics and pacing, her trademark tone larger than life. Ms. Mutter’s solos interweaves with the ensemble in ever-changing combinations which features dialogues in counterpoint with Joseph Johnson’s cello, a wonderfully gritty, double-stopped, melancholy mood-change, and a well-shaped closing ride.

The Adagio’s highlights included her initial, cantabile exchanges with the plaintive harpsichord, followed by a sustained high note of such purity, Ms. Mutter’s violin sounded like a living thing. In the finale, Allegro Assai, her fiery instrument dances through the rondeau while the ensemble keeps well back. The audience was conquered.

The Beethoven 5th Symphony in C Minor was full of surprises. Michael Francis, the daring, young, British Conductor made his TSO debut memorable by building a vivid account of this classic. Taking a conservative tempo to start, Mr. Francis took Beethoven’s abrupt turns in the score forcefully and at full volume, and let them sink tenderly. The effect was gripping, a reading Romantic in the style of Tchaikovsky. Maestro Francis also made much of the 5th’s martial elements, both slow and quick, in the subsequent movements.

There were moments when the orchestra seemed a bit loud, especially in the closing bars of the finale, and where in these high volume passages, the unity of sound the TSO has achieved somewhat fell apart. But on the whole, Mr. Francis’ originality kept the mind delightfully focused on music that might have faded into familiarity.

Ms. Mutter gave a generous account of the commissioning of the Gubaidulina violin concerto for her, omitting to repeat the story that when she played it for the composer at the first rehearsal with Simon Rattle and the Berlin Philharmonic in 2007, Gubaidulina “took her glasses off and said something to the effect that this was just the way she always had hoped that it would be played.”

The title, In Tempus Praesens translates to“In the present time”. The composer holds a challenging view of “how time changes in connection with the changing psychological conditions … In ordinary life we never have present time, only the perpetual transition from the past to the future…Only in sleep, in the religious experience and in art are we able to experience lasting present time. ”

From the first, quiet, dissonant, pleading solo violin passage we get one of Gubaidulina’s most extraordinary, original musical effects: the violin’s single voice disintegrates into a shower of chimes, bells, insectoid buzzes and rasps resounding from the orchestra, and coalesces again into fluent harmonies of the winds, brass, and low-register strings that suggests an inquisitorial vocal chorus. There are also dramatic sequences where the violin’s voice is overwhelmed, disappears, and gradually is resurrected.

33 minutes of music unfold in a shifting stream of fragile whisps, sonic eruptions, fecund silences, and hypnotic spirals of single notes. Five movements are separated only by deafening strokes on the tam. Ms. Mutter dominated with the tone of her instrument, the only violin on the stage, swelling and sweeping and trilling in finely calibrated gradations, working beautifully with the intricacies of the orchestra conducted by the ever-present guiding hand of Michael Francis.

Ovations galore followed, and even more praise is due to the TSO as it continues to offer programs daringly enriched by music of composers from the present.

This entry was posted in Reviews and tagged In Tempus Praesens, Toronto Symphony Orchestra. Bookmark the permalink.