Posted on September 29, 2012 by Stanley Fefferman 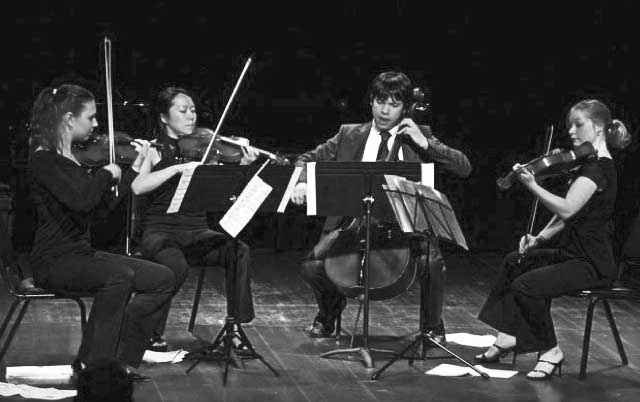 The Attacca Quartet have a youthful perspective on time. Being young (they formed in 2003 at the Julliard School), they have time for ambitious projects. “The 68” is the title of one such project they created in New York—to perform all sixty-eight Haydn String Quartets.

Haydn’s F Major, Op. 77, No. 2 of 1799 opened a program shaped by the timeline of careers. Haydn’s piece was the penultimate composition of Europe’s most successful and almost retired composer. The Prokofiev, albeit his first quartet (1931), is the mid-career opus of a 40 year old Russian tiring of being famous in Europe and America for his operas, ballets, concertos, and symphonies, and longing to return to Stalin’s Soviet Union.  Mendelssohn wrote his second string quartet, his op. 13 in 1827, when he was 18 years old. Besides being timelessly fine works, all three compositions express age-appropriate insights.

The first and second subjects of the Haydn introduce the predilections of both composer and ensemble. Thematic allusions to Leporello’s catalogue aria in Mozart’s Don Giovanni signal Haydn’s sense of fulfilment with his life and reputation. The Attacca make the lyrical first subject very expressive, emphasizing its romantic nature with delicate nuancing of dynamics. The second subject is slower, moody, with shadowy reflections. The Attacca’s interpretation inclines towards a Romantic rather than Classical style, more legato, more flowing rather than dancing.

The Attacca give the Menuetto a distinctive tone: it is theatrical, a quality especially evident in cellist Andrew Yee’s expressive demeanour. The high contrast Presto section has a jesting quality; violist Luke Fleming contributes strong feeling to the quietly sonorous  Trio section. Communication between viola and cello highlights the tender contrapuntal dialogue of the Andante. The same may be said of the finely filigreed collaboration of the violins—violins, Amy Schroeder and Keiko Tokunaga. This is fully ripened Haydn.

The Finale is all energy and imagination, the trademark of Attacca, although cellist Andrew Yee may sometimes carry the youthful hi-jinks a bit too far. Nonetheless, this opening performance came across as a celebration of musical talent.

The Prokofiev String Quartet No. 1 in B minor, Op. 50 (1931) was commissioned in Washington D.C. by the Library of Congress as America was slipping into the Great Depression. In it are developments of a new sound: in part the broad sweeping music of the American prairies you get fully from Aaron Copeland, and in whiffs from Dvorak’s American compositions. The other new sound is a restless knocking that sets your teeth on edge, similar to Tchaikovsky’s “Fate” theme that says”all life is an unbroken alternation of hard reality with swiftly passing dreams and visions of happiness …” This dire mood dominates the slow movement, eccentrically placed at the end of the work: musical allusions to the work of Borodin presage Prokofiev’s calamitous decision to return to the dark prison of Stalin’s Soviet Union.

The Attacca bring all this material to full expression catching the deep seriousness, but all the while keeping in focus the irrepressible youthful vigour of their energy that mingles especially well with the zany mischievousness that underlies Prokofiev’s music.

Felix Mendelssohn at 18 remains as arguably Europe’s greatest ‘child’ prodigy. However, there is nothing of apprenticeship in this work, though, to his credit, the composer chose for a models two of Beethoven’s late quartets (Ops. 95 and 132) much against the advice of his mentors. The most evident borrowings from Beethoven in Mendelssohn’s String Quartet No. 2 in A minor, Op. 13 are: a unifying motif that runs through all four movements and gives the work a cyclical character; and, a strong, chromatic, fugal section in his middle movement.

The Attacca played the opening Adagio brightly; their dynamic conferred on it a pleasing shape which continued to evolve during the subsequent Allegro Vivace section. They expressed the chorale-like Adagio movement with questioning tenderness. I liked the duets of first violin and viola, the viola solo, the dialogue with the 2nd violin, and the vibrant palette of the gypsy section.

The Intermezzo opens with a stand-alone pizzicato section that evolves into a folk-dance running on tiptoes through a hectic Scherzo. Their dynamic control in the Finale makes amazing wave patterns, recalling for me the wild energy of the early days of the St. Lawrence String Quartet with whom the Attacca studied. The closing argument includes a tender cadenza by violinist Amy Schroeder, following which the ensemble gathers to produce a perfectly synchronized drone that closes the piece.

The audience, whom violist Luke Fleming flattered for our chamber-music savvy reputation, was unreserved in its appreciation of the youthful verve of this ensemble. The Attacca Quartet rewarded us, without reserve, after only one curtain-call, by an encore of the entire closing movement of Ravel’s glorious String Quartet in F major.