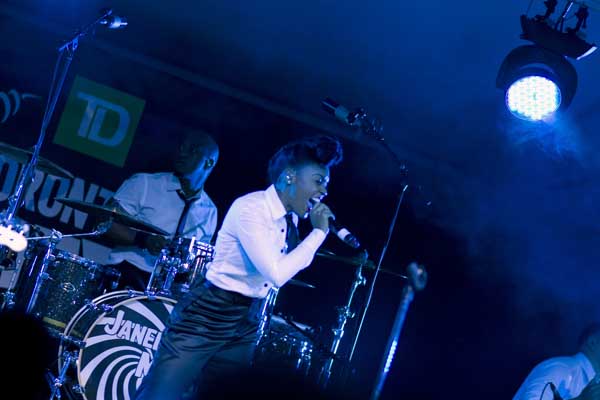 I imagine meeting Janelle Monae after her show last night on the TD Toronto Jazz Festival Mainstage and saying these words to her:  “Miss Monae, you are pretty as Miss Sarah Vaughan. Your style has majesty , like hers, and like your biggest fan, Prince. Like them your voice is strong and you sure know how to use it. Your hair is like none other. 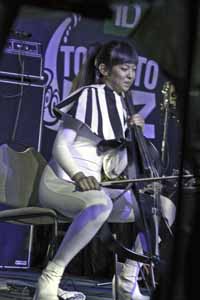 Your dancing jive puts me in mind of the Jackson Five, and like MJ you stage a show that comes from a world all your own, one you call The ARCHANDROID. It is spectacular—with your phenomenally dressed 11 piece band and back-up dancers dressed in matching black and white all moving synched to your every move like nothing since the late great James Brown, whose mantle your wear on your tuxedoed shoulders.

You sing whatever you like, however you like it. As I recall  the poppy “Locked Inside,” the Whitney Houston slow cover of Nat King Cole’s “Smile,” your own biggest hits—the mesmerizing “Tightrope”, and “Cold War,” not to mention “Goldfinger,” your audaciously straight homage to that other tuxedoed high-flyer, James Bond.

Your ARCHORCHESTRA is amazing, but being an older man, I feared Brandon Gillard’s heartthumping bass was going to send me into arrhythmia. I liked George 2.0 stirring the audience up for you, and I appreciated the funky lyrical music of your opening band led by the multi-talented Roman GianArthur, your collaborator on the Grammy nominated album version of ARCHANDROID.

You are, in the words of Nat King Cole, ‘Unforgettable.’ ” 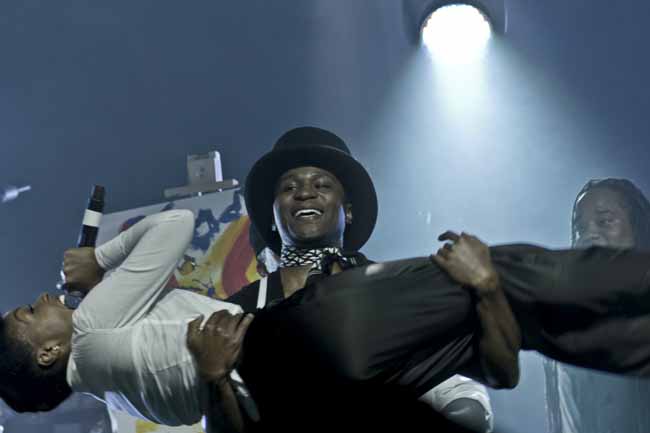