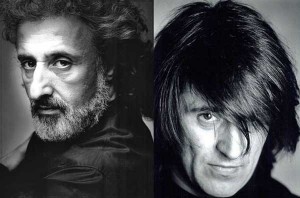 Show One Productions presented The Moscow Soloists Chamber Orchestra with their founder, Yuri Bashmet, as conductor and viola soloist. Bashmet conducts with bare hands, frequently raising them open, palms up, and in towards himself as if he were asking the ensemble to fill him with the music. Together they demonstrate remarkable control in shaping dynamics that can swell to ardent fullness and fade away to a barely audible whisper.

They gave deeply satisfying accounts of two specially arranged works: Mahler’s arrangement for chamber orchestra of Schubert’s String Quartet in D, D.810 “Death and the Maiden”; and the Brahms Quintet for Clarinet and Strings No. 1 in B Minor, Opus 115, arranged for viola by the remarkable Mr. Bashmet. Both  are very late works, made when their respective composers were full of intimations of the end of life. The emotional depth in these works was played with unreserved Slavic emotionality that gained extra richness and weight from the Chamber Orchestra format. The cost of this gain was a loss of the sinuous bite you get from a string quartet’s conversation, and the loss of the clarinet’s unique voice as it soars alone among and above the strings, whereas the viola’s timbre, warm and rich as it is in Bashmet’s hands, frequently merges with with the flock.

The legendary cellist Mischa Maisky, currently on this tour with The Moscow Soloists, appeared on a Toronto stage for the first time in nearly  30 years attired in a loose electric blue silk tunic. Everything about Mr. Maisky is markedly expressive, including his animated bodily expressions during rests when he is listening to the orchestra , and his vivid vibrato. I found his work insightful as he brought out the nostalgic smile that lurks behind loss in the melancholy depths of Tchaikovsky’s Nocturne in D for Cello and Orchestra, Op. 19, No. 4.  Mr. Maisky’s approach is passionate, enlivened by a devil-may-care virtuosity, and makes for a persuasive performance.

Bringing his unrestrained approach to the stepwise measures of  Haydn’s Cello Concerto No 1 in C, arranged for strings, Maisky’ cello utters an earthy, low register growl before launching a highly vibratoed singing line towards short cadenzas that stood out as individual and rather romantic. He took legato liberties with the Adagio often joining the light melodic lines. The cello’s imitation of the ensemble’s phrases was stately and graceful as the progress of a swan on tranquil water. The final Allegro Molto was exuberant and showy in a pleasing way. Not much classical restraint—as far as you can get from a performance on traditional instruments—but  all the same, good for the heart.

As I postscript, I note the outstanding solo work by the anonymous concertmaster; the arresting duos of viola and cello in the Allegro of the Brahms, as well as the cello solo in the concluding Con Moto. Finally, how nice it was to end an evening of serious music with smiles and laughter as the Moscow Soloists celebrated their 20th anniversary with  three hilarious variations of “Happy Birthday” played as a Polka, a Tango and a Csárdas. Hey!