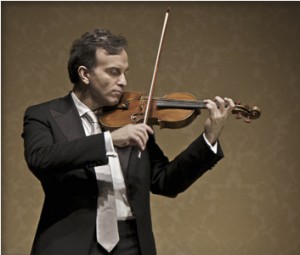 Gil Shaham crosses to centre-stage like he’s on a short green light, and the instant he gets there he begins to play.

As expected, he takes the Preludio of Bach’s cheery Partita No. 3 in E Major, BMV 1006 at a quick, buoyant pace, his Strad clean and biting, the line of semiquavers continuous, his pallette luminous like a grey-scale platinum print.

Having chosen the virtue of quick, dance-like rhythms, Mr. Shaham achieves expressiveness with minimal shifts in tempo and dynamics, trusting in gritty double- stopped passages and low register earth-tones to ground his terpsichorean flight into the wild blue. The tension of attention that Mr. Shaham’s break-neck virtuosity generates kept my interest alive and on the edge of its seat until the lovely soft landing of the closing Gigue.

Bach’s Sonata No. 3 for Solo Violin in C Major, BMV 1005 opens with an Adagio. This relaxed mood introduces a musical line with more colour, that sings more than it dances, and has the leisure to tease expectations of repeats and resolutions. The Fuga is very fast, dense, varied brilliantly by pauses, catches and tumblings measured in nanoseconds. Triple WOW on the excitement metre. The brief Largo gives way to an Allegro that bursts out of the gate like a greyhound after the rabbit and pulses like an engine till Mr. Shaham brings it to a shapely conclusion.

The evening was crowned by the Partita No. 2 in D minor, BWV 1004, itself crowned by the 15 minute Ciaconna, considered by some as the greatest piece of music ever written. Of this movement (aka) Chaconne, Brahms wrote in a letter to Clara Schumann: “If I imagined that I could have created, even conceived the piece, I am quite certain that the excess of excitement and earth-shattering experience would have driven me out of my mind.”

Mr. Shaham’s approached the D minor Partita without hesitation, and openly. His Allemende was taut, melodic, resounding. The Corrente sprightly, the highlights darkly underlined like kohled eyes; the Sarabande stately and thrilling; the rhythmic Giga dancing without a break into the Ciaconna.

The 64 variants of this movement comprise a labyrinthine architecture that has been compared in sacredness and profundity to the I Ching. It is also said to be the complete compendium of violin technique and contrapuntal knowledge of Bach’s age.

Mr. Shaham’s performance was encyclopaedic—he seemed to pull it all together—the throbbing, human intensity, the serene, celestial overview, the devil in every technical detail. Personally, I felt humbled by the joy of this performance, and I imagine Mr. Shaham felt something similar.

The audience, as Brahms imagined, went a bit out of their minds.