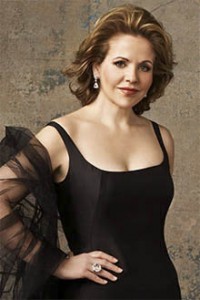 Renée Fleming, darkly gowned, transported us back 100 years to share her music of the Viennese night.

Zemlinsky’s  turn-of-the-century Op. 7, Fünf Lieder details the visceral turmoil of an extra-marital affair. This is the music of anguished nights spent in longing. The mood is melancholy, the piano chords are heavily chromatic, thick and twisting; Ms. Fleming’s syrupy-rich vocal colours throb with intensity that becomes hallucinatory in the eerie “Letzte Bitte.”

Sustaining the mood of late Romantic sensual melodrama, there followed two songs by Schoenberg: Jane Grey, Op. 12, No 1, a gallows ballad on the execution of the young and blameless English Queen-elect Jane Grey and her husband; followed by Erwartung, Op.2, No 1, a visually evocative song about sexual anticipation. Hartmut Holl kept a perfect balance between voice and piano and closed the song with lovely extended solo.

After the tonally clipped, flattened, muted writing of the previous works, the three more melodic songs by Korngold sounded positively lush, especially in the piano parts. Despite the continued gloom of the titles (“Deathsong,” “The Hero’s Grave…,”) this is point in the program where the audience became very enthusiastic, applauding after every song.

I think of Renée Fleming’s voice as a spectrum of tonal possibilities ranging metaphorically, from gold, to silver to crystal. After intermission, and gowned in a lighter shade of pink under black lace, she moved into the more comfortable area of French song reflected in her just-released album Poèmes. The highlight of the evening was her treatment of the songs of Henri Duparc, especially his masterpiece “Phidylé.” Ms. Fleming refines the song’s gradually expanding sonorities through the gold of her range, to the silver, to an impossibly fine crystal whisper, a climax of happiness sweetened by Mr. Holl’s last piano’s  chords.

Two songs followed by Henri Dutilleux based on World War II sonnets by Jean Cassou: “there was nothing but uprooted tree trunks,” and ” I dreamed I was carrying you in my arms.” By turns vehemently agitated and dreamlike, these difficult songs proved lively and pleasurable listening as Mr. Holl’s light touch on the keyboard followed Ms. Flemings fastidious vocal dynamics towards a triumphant close.

The audience rose in homage and were rewarded with three encores: the lovely “Marienlied,” from Korngold’s opera Die tote Stadt; Bernstein’s “I Feel Pretty,” and this evening’s final answer— “Vissi D’Arte” from Tosca that sent those shivers running up my spine.