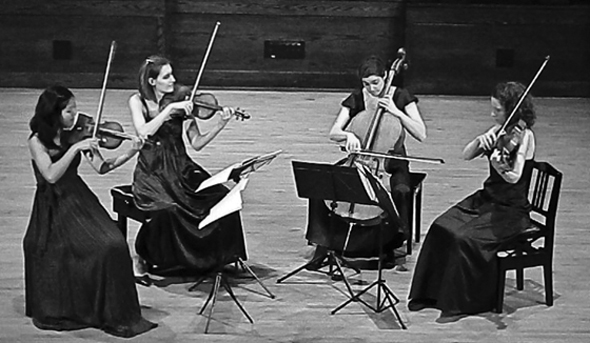 The Cecilia String Quartet’s account of Shostakovich’s Seventh Quartet, Op.108 was almost unbearably exciting. It begins with Min-Jeong Koh, newly in the first chair, playing the delicate theme, solo, in a nervous, wispy voice. Rachel Desoer, the new cellist, answers from a couple of octaves down creating a low frequency agitation that makes the subsequent pizzicato feel like the twitch of overstressed nerves that are about to snap. The excitement from the raw, nakedness of this wierd mood finally fades in a shrill and wispy ostinato duet of the violins.

Sarah Nematallah’s second violin muted, followed by the extraordinarily velvet voice of Caitlin Boyle’s viola induce an hypnotic somnolence in the second movement that disables defences against the fortissimo waves of assault by that same viola at the opening of the third movement. A hard-hitting, perfectly synched tutti runs and bounces till it dissolves in a kind of joking mood that metamorphoses into a dreamy waltz with a slowing pulse that subsides into a gentle requiescat.

Three sketches from Ana Sokolovic’s Commedia dell ‘arte contributed the fun and excitement of music that is new and good-humoured. The sonic palette of this work is squeaks and twitters, long, jerky chains of scales and phrases that undergo repetition, extenuation, sudden shifts or graduations of tempi, whiney, noisy, rusty, creaky noises all executed with this ensemble’s fabled gift for unison whether in passages of delicacy, force, or as in the finale of this work, with their instruments held like guitars strummed by cardboard plectrums.

These afternoon hijinks were founded on two very solid performances of serious works: Mozart’s String Quartet No. 16 in E flat Major, K. 428, and Beethoven’s last Quartet, the No. 16 in F Major, Op. 135. The Cecilia’s gift for tonal sculpting gave the Mozart a markedly expressive flavour, laced with a delicate humour. The second movement seemed a bit soupy and the tempo dragged till the Menuetto cheered up the mood.

Their Beethoven was sublime. Alternately gay and dire, with a cheerfulness supported by a flayed sensitivity, it exemplified the life-lesson given by Pozzo to Lucky in Samuel Beckett’s Waiting for Godot—“Dance,Misery.” Caitlin Boyle’s viola in the opening of the first and third movements, and passim elsewhere, evoked—to borrow a phrase from the poet Wordsworth, “Thoughts that do often lie too deep for tears.”