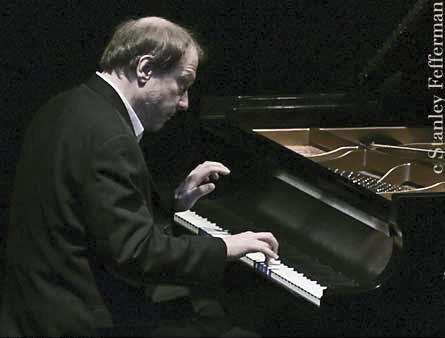 The breathtaking piano virtuoso Marc-André Hamelin appeared in Toronto this evening in a new role: that of  “pianist-composer,” by ending his program with a selection from the Etudes he has written over the past 25 years.

The  program included apt works by Alban Berg, Liszt and Debussy. Mr. Hamelin showed each of these works in a new light, so that collectively they created a context for his Etudes.

Glenn Gould once declared Berg’s first and only Piano Sonata “of 1908 among the most auspicious Opus Ones ever written.” Much the same has been said about Hamelin’s Etudes when they were released by Hyperion in 2010. In his performance of the Berg Op. 1, Hamelin shows his affinity for music that sings in a traditionally based form but hovers ambiguously between tonality and atonality. His genius is to shape Berg’s improvisational flow of chromatic tones, alternately dreamy and emphatic, into vivid dramas: pastoral idylls where breezes that whisper over limpid streams abruptly crack and shatter in outbursts of passionate urgency. One feels equally the strength of turmoil and shelter in Hamelin’s hands.

Like the Berg, Liszt’s Piano Sonata in B minor of 1854 was composed as one long movement that keeps basic sonata form latent, relying for unity on thematic transformation of a characteristic motif. The work provides context for Hamelin’s work because Liszt wrote this piece when he retired from concertizing and focused on composition. Here, and in subsequent works, one hears the great Romantic push his music to the limits of tonality and beyond into atonality. Hamelin’s work shares these boundaries.

For sheer boldness, Liszt’s opening gestures compare with the four- note knock-on-the-door motto of Beethoven’s Fifth Symphony. Hamelin whips this energy into heart-stirring excitement, lets that flow into lyric loveliness embroidered with the fluid traceries of the honeybee. The music builds many times to a hectic flush, descends into darkening day’s-end gloom, rises again in a thunderous, jovian fugue, slows, changes to a delicate character, and in three chords brings us into a profound silence.

The first Etude he played is a setting for solo piano of Goethe’s poem Erlkönig once set by Schubert. It thunders darkly in the bass behind very weird chords redolent of jazz improvisations à la Gershwin. The second Etude (like the others, in a minor key) is an original work that tells, in florid style, the story the curls that flow in circuits from the head of Queen Berenice of Egypt. Etude No. 7 (after Tchaikovsky) is a beautiful melody for the left hand that brought to mind Chet Baker’s rending rendition of “My Funny Valentine” at his last concert, in Paris, just months before he died of heroin abuse.

Etude No. 11 is an original Menuetto that struts in ragtime colours like a Louisiana  cakewalk and somehow reveals the composer’s higher self. The final Etude, No. 12, Hamelin describes as a “monstrous agglomeration of cruel virtuosic devices.” It struck me as irrepressibly crazy in the joyful way of a master just letting go into exuberance.

For an encore, Mr. Hamelin gave us a preview of his Paganini variations, 10 minutes of the most fun you’ll ever have crowding around a piano at the end of party.