Posted on March 1, 2012 by Stanley Fefferman 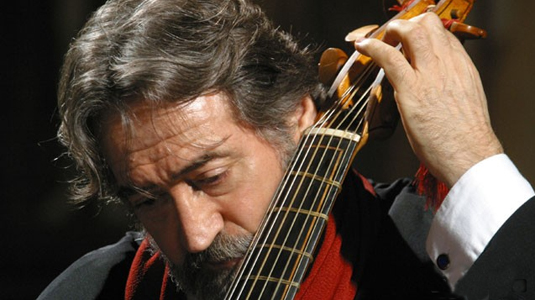 This concert celebrates how music works with changes. Jordi Savall has devoted a long and distinguished career to the preservation, restoration, and dissemination of early music—the music and instrumentation of Medieval and Renaissance Europe. He has participated in over 100 recordings as a virtuoso violist, and as artistic director of the ensemble Hespèrion XX, (updated this century as Hespèrion XXI).

This evening’s program is devoted to how European music, particularly from old Spain, was simultaneously preserved and changed since 1492 by indigenous American forms and imports from African music. Mexico alone has evolved a dozen variations of the guitar including the haupanguera, leona, jarana jarocha, guitar de son and the mosquito (half the size of a ukelele). Sr. Savall illustrates many of these changes with the participation of his Tembembe Ensemble Continuo.

Another, major change reflected in the program is the recent death of Sr. Savall’s wife, the soprano Montserrat Figueras. In homage to her, there is the medley of works by St. Colombe (père et fils) and J.S. Bach entitled The Sorrows.

Music from the ancient world as we had it from Sr. Savall and his ensemble in the first half of the program, in the words of one writer,”is textured and rich but not overly busy–it conveys a deep, unrushed contemplative space, often characterized by longing and melancholy while also seductively rhythmic and charming. The centrality of the viola de gamba in the arrangements accentuates this quality of depth and flow.[Even] with Bach, one feels one is hearing a familiar work in a new way, relaxed yet fresher and more nuanced”.

“Folias antiguas”, the opening medley of folksongs has Savall improvising over a standard chord sequence, the wail of his alto viol backed by the rolling thrum of guitars, the tap and boom of a drum, every sound clear and distinct as the jingle of spurs on a hot, dusty road, urgent as heartbeat amid the rush of arterial blood.

The “Homage to Montserrat Figueras” was a solo performance on bass viol that Savall somehow made into his personal voice, playing slowly, quietly, modulating his tone, inflection and timbre to the flow of his reflections. Greatly appreciated by the audience.

Joyful dance music followed, including a Bourée by Bach and finely tuned vocal chorus work by the ensemble. After intermission there was a further energy shift towards music of the New World, some of it very physical, demonstrating pretty clearly how difficult it is to be stuck in a seat while the music is tugging at every nerve and muscle in the body.

There was the Huasteco improvisation “Dance of Moctezuma,”with its heavily repeated ostinato bass; the Náuatl improvisation “Xochipizahuatl” honouring the Virgin that is played in processions; a Guaracha, that expresses the burning, panting, heat of religious ecstasy; and the inevitable “Fandango” which, in the words of Casanova quoted from the stage, expresses lascivious love making, “from the sigh of desire to the ecstasy of possession.”

If there was a difficulty in the evening, it was the difficulty of being confined to a seat with so much music directed to our meat. The standing ovations and encores and more ovations solved that.