Posted on November 3, 2011 by Stanley Fefferman 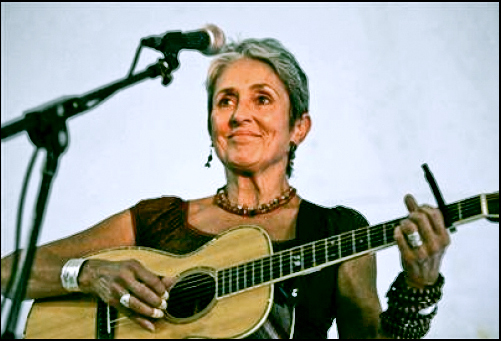 High-heeled boots and long, long legs in tight blue jeans was all I could see as Joan Baez crossed the stage alone. WOW! Then it was her, ready to work, guitar strapped on, a scarlet shawl streaming round her shoulders  trailing behind her like a glamour .

She waved at the audience as she walked, coming toward us like an old friend, perched herself on a stool, and got into her song. “I believe in prophecy, /Some folks see things not everybody can see. /And, once in a while, they pass the secret along to you and me.”

Even though it’s a Steve Earle song, Joan, as ever, sings with such total conviction, you feel she is telling her truth and connecting you to some higher vision. So when she sings the refrain, “Yeah, I believe in God, and God ain’t me,” it’s like, “WHOA! She’s gone all American fundamentalist on us.”

“Farewell, Angelina,” brought us safely back to nostalgia: the mid-Sixties, folky love-ballads, Baez and Dylan. And even further back she took us by remarking that her first time in a Toronto venue, they were playing “God Save the Queen.”  Joan’s ‘band’–i.e. the multi-instrumentalist Dirk Powell, joined his banjo to her guitar in keeping the mood of traditional romance with the Irish-American ballad, “Flora, Lily of the West.”

In her cover of Dylan’s “Don’t Think Twice,” you could begin to notice how she avoided the higher notes, tweaked the pitches to avoid long intervals, sculpted the contours of the melody beautifully to fit her voice, but at the same time, somehow took all the excitement out of the song.

Keeping with the ballad theme, but updating it and bringing back the theme of religion, Joan and Dirk (on mandolin this time) gave us Richard Shindell’s startling “Ballad of Mary Magdelen.” Mary is in rags, from ‘Palestine’, gave up her work when she was in her prime, “It was his career or mine,” doesn’t understand how she ever let Jesus go and “walk off with this heart of mine.”

The energy of the show began to wind down with Donovan’s “Catch the Wind”, and became a bit depressing with Dylan’s “God On Our Side.” Her tweaking down of the pitches ran through all the songs like a habit that ground them to a sameness: “Joe Hill,” once so inspiring it brought shivers of inspiration every time I heard it, was kind of sad, and Leonard Cohen’s “Suzanne” was embarrassing.

On the other hand, Joan (with Dirk on accordion) sang  Antoine Gérin-Lajoie’s ” Un Canadien errant (1842)” with respect and a fine French accent. She put in a powerful word in support of the “Occupy Everything” movement, and affirmed her belief that peace will come to the Middle-East by singing Steve Earle’s words “I believe that one fine day all the children of Abraham/ Will lay down their swords forever in Jerusalem.”

With her reverent rendition of Dirk Powell’s “Just the Way You Are,” I was able to forget about the songs Joan’s trilling soprano used to sing like an angel, and I could just stay with the lovely vibe this forever formidable woman brings to her every utterance, a vibe resonating with intelligence, conviction, humour, honesty, and above all, the easy wisdom of a survivor.