Posted on October 24, 2011 by Stanley Fefferman 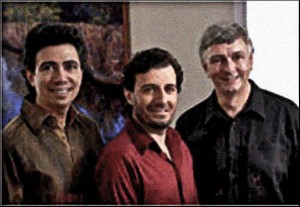 Shakespeare thought to combine food with music so he wrote the line, ”If music be the food of love, play on,” and put it in the mouth of the love-starved Duke of Milan.

Amici Ensemble thought to combine food with music so they rehearsed for Brockton General Chef Alexandra Feswick, and she created an imaginative medley of hors d’oeuvres in whose flavours this afternoon’s audience might ‘taste’ the music. The challenge by elegant host James Chatto to keep in mind the union of music and food at intermission lent a dash of spice to the entire concert-going experience.

Poulenc’s L’invitation au chateau, (1947) was promised for the palate as ‘Beet-root Jelly’, which lent an angle to the listening. The opening clarinet solo in waltz-time by Joaquin Valdepeñas was smooth and cool, not too tart; the ‘Tango’ was slinky, the ‘Polka’ was earthy, and the concluding ‘Follement’ was a sparkling, brightly-coloured bustle of clowns, so, yes—Beet-root Jelly.

Bohuslav Martinu’s La revue de cuisine (‘Kitchen revue’), 1927, is a jazz suite and ballet for clarinet, bassoon (Michael Sweeney), trumpet (Andrew McCandless), violin, cello, and piano. The plot is an hilarious farce about the marriage of cooking utensils: Pot and Lid’s union is threatened by the rival Twirling Stick. The jazz element is not so much jazz as it is a complex, dissonant mix of the pop, ragtime cum tango, charleston, shimmy, oompah 2/4 riffs that Europeans were able hear as jazz and blend it with the drama of colours that parade in Ravel’s Bolero. Nonetheless the rich harmonies and cross-rhythms are more than crazy enough to be interesting. It tasted like a philo dough filled with forest mushrooms in butter, caramelized onions, thyme, garlic and lemon juice.

There was no dish prepared for Serouj Kradjian’s piano solo of offerings from Rossini’s late work Péchés de vieillesse (Sins of Old Age). Rossini adored food and we hear his reflection on the joys of Anchovies and Dried Figs, the latter coming off the keyboard sounding plump, sparky, liquid and sweet.

After intermission, the well fed audience were treated to Aline Kutan’s thrilling soprano, accompanied variously by the Amici clarinet and piano with Marie Berard’s violin. The lieder by Mozart “L’amerò, sarò costante” from act 2 of Il re pastore (The Shepherd King) 1775, and Schubert’s “The Shepherd on the Rock” (Der Hirt auf dem Felsen), D. 965, raised the music to a level beyond the reach of food, though there were delcious dishes for each.

Ms. Kutan brought us back to earth with her quick comic recitations recipes from Leonard Bernstein’s ‘translation’ of Émile Dumont’s La Bonne Cuisine. Alexandra Feswick’s comment on Dumont’s Queues de Boeuf were her juicy croquettes prepared from braised oxtail meat stripped and blended with carrot and celery and served with a dab of sour plum sauce. Mmmmm.

William Bolcomb had the final word with his hilarious song but repulsive recipe, “Lime, Jello, Marshmallow, Cottage Cheese Surprise (1986)” which the Chef was forbidden to emulate.

Your comments are welcome HERE.