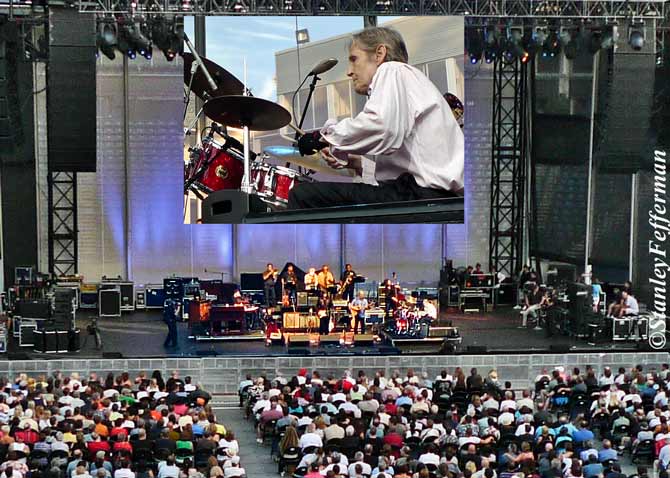 Capital One BlackCreek Summer Music Festival got it right last night at the Rexall. The weather was perfect. A great crowd  that started out sitting finished on their feet singing and dancing after a three-hour more-than-your-money’s-worth show.

The first 90 minutes was Levon Helm on drum and mandolin, the winner of a battle with throat-cancer at 71 and, as ever, smiling. Levon, fronting a 3 guitars with bass and keyboards 5 piece brass band, opened the nostalgia gate with The Band’s longtime Robbie Robertson hit, “The Shape”.

Levon left a some of the singing and all the talking to his band-leader Larry Williams, last seen in Toronto with Bob Dylan’s band. Larry shone on guitar and fiddle beside his wife, the ‘luminous’ Teresa Williams. They made beautiful vocal harmonies with the 1959 Dill &Wilkin tune “Long Dark Veil” first recorded by Lefty Frizzell and by Jerry Garcia.

This performance was less about nostalgia-hype and more about musicianship going rich and deep into the moods of blues, dixie, gospel, country, as well as rock. We had  Larry Campell picking  Kelly Joe Phelps’ “Cypress Grove”; Levon singing dixie his own tune,”Ophelia”; the great keyboardist Brian Mitchell leading the chorus on Huddie Leadbetter’s “Bourgeois Blues” with Larry on fiddle and Clark Gayton agonizing on trombone.

The crowd started to get worked up by the slow drag treatment of “Just a Closer Walk With Thee.” Levon and his band put a spell on them with the “Iko Iko” call and response chant “Jockomo fee no wah na nay,” got them standing and clapping with “Chest Fever.” Finally, everyone took a load off their fannies with “The Weight.”

If Levon Helm’s show was like a rich, skillfully-prepared, expertly served many-course meal, John Fogarty’s show was a dose of excitement shot right into your vein.

John Fogerty coming down his own route 66 bounces onto the stage like a he’s still in high-school, singing “Hey, Tonight,” and it’s back to the future with Credence Clearwater Revival. 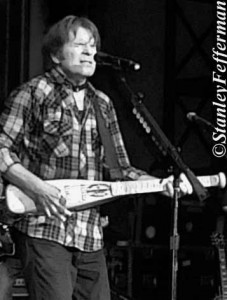 Unlike time, which he seems to have made stand still, Fogerty flickers all over the stage, changing guitars for every tune, crazing the audience into adulation with a four shot combination of fiercely played “Green River”, “Lookin’ Out My Back Door”, “Born On The Bayou”, and a really extended “Ramble Tamble,” after which I am securely locked into that summer of 1970.

There’s some softer feeling (before everyone totally goes wild) in “Put A Candle in the Window,” and “Have You Ever Seen The Rain.” That man has written some very fine songs that have touched his fans, many of whom are still living, and are now beginning to work themselves into a quasi-religious ecstasy.

Some front-row ladies are first up, dancing and waving at him. That leads Fogerty into “Rock and Roll Girls.” The rest of the boomer and better crowd rise to their feet for “Down on the Corner,” and rush the stage: there are shouts of “JOHN, YOU ARE A GOD.” Fogerty meet them at the stage-edge and runs his fingers over a row of offered hands.

From there it’s right “Up Around the Bend,” and “It Ain’t Me.” By then the entire audience is like strapped to a big wheel that just keeps on rolling: Fogerty finishes it off with “Proud Mary.”

A good night to go into with the full moon a-waning.