THE HEART OF ALL MUSIC reviewed by Sharon Goodier 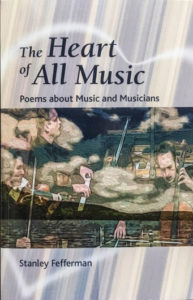 The Heart of All Music: Poems about Music and Musicians, by Stanley Fefferman, Aeolus House, 2018. 52 pages.

Fefferman’s poetry is a phenomenal verbal symphony of sound, lyricism, imagery, rhythm and reason. A former critic, he knows music with the intimacy of a lover.

It is possible to appreciate The Heart of All Music without being familiar with the music pieces that inspire his verses because Fefferman’s themes, like those of Berg’s Piano Sonata #1 are worked “in a grand architecture” that becomes an open house invitation to the palace of music. His experience of the music becomes ours as he describes “the buzz of an autumn fly/dying over piano keys”, “A conversation between agonized strings”, John Hammond “driving a cargo of blues down the road/like a runaway mule train”. Nowhere does Fefferman allow his poems to become runaways. His talent is like a scalpel, leaving no fat, nicking no bones, no blood suppurating from a badly closed stanza. Fefferman’s poems takes us on a journey from the “querulous conversations” of Schuloff, to Bartok’s “sadness so tender,” to Brahm’s “golden lightning of imagination,” and music that is “a look into the face of suffering/for reasons to sing as long as there is life”

I was inspired to googled as much of this music as I could find online, but that is not necessary in order to read this book. Fefferman’s poetry is music to the inner ear in the brain’s poetry centre which then stimulates the production of serotonin making you feel good in a way that plain prose does not. Even his prose poetry tickles the receptors in the brain because these poems are lyrical, rhythmic and full of images, visual, aural, tactile and the metaphors are concrete. Imagery and metaphor are processed in the poetry centre of the brain.

I long for “the gesture of mind veering along the edge of an emotional cliff” in my own poetry but I am too much of a thinker, not enough of a feeler. Fefferman is both, allowing us to surf with him on feelings finally landing on the white sand of reason. Like the music he loves, his poems “replay themselves in the mind/long after the instruments are silent”. The Heart of All Music:Poems about Music and Musicians is a masterpiece.

The Heart of All Music: Poems about Music and Musicians, by Stanley Fefferman, Aeolus House, 2018. 52 pages. $20, Buy it on Amazon.ca, Indigo.ca, Quattro Books.ca