Posted on October 11, 2013 by Stanley Fefferman 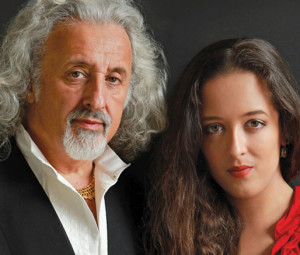 Lily and Mischa Maisky, a remarkable daughter-father duo, flipped my musical expectations of the program they performed.

Lily Maisky’s playing so perfectly matched the intentions of her famous father that my attention often rode the mystery of the crisp and luminous borders her piano wove around the cello’s opulent meditations. Where the cello sang, the piano danced; where his sound flowed like dark waters, hers sparkled like reflected starlight.

Together they conjured unexpected depths in De Falla’s Suite populaire espagnole. As the title suggests, this piece usually appears as showy, Iberian entertainment. Their “Nana” was clear and crisp while expressing profound longing. The moonlit piano opening of “Asturiana” and its subsequent development blended the melancholy strains of Spain with those of Russian Jews in a way that gave me shivers. The final “Jota,” was an ecstasy with Lily pounding her piano and Mischa’s cello wailing out to a place beyond both pain and pleasure.

Schubert’s Sonata for arpeggione & piano in A minor , D. 821, is one of the most beautiful cantablile compositions ever, and though it is hardly ever played on the  extinct “arpeggione,” or “guitarre d’amore” it was written for, it has been arranged for every imaginable instrument, most notably, in my opinion, the guitar where the natural lyricism of the music sparkles. This evening’s performance, notable for the subtle touch of both players, seemed, despite the piano’s silvery timbre, to drown in the highly textured richness of the cello’s intonation.

The music after intermission was for the most part profoundly moving. Rachmaninov’s Vocalise for Cello and Piano, Op. 34, No. 14 evoked the emotions of “Impressionism”—the poignancy of feelings that start out as vividly rhapsodic but as they fade dissolve into sadness. Élégie in E-flat Minor, Op. 3, No. 1 by the same composer displayed an interesting contrast of transparent piano and cello’s density, but the emotional dramatics seemed to me a bit over the top.

The Maiskys opened the Cello Sonata in D minor op. 40 by Dmitri Shostakovich just right: the piano lyrical, the cello passionate; the piano sketching outlines of the composer’s characteristic sarcasm, and the cello trolling the depths of his musical code. Though the movement is in conventional sonata form built around lyrical themes, the music suggests an exploration of madness that is both intelligent and very exciting.

The scherzo is a madcap “Jewish” dance of skeletons grinning and rattling in the glassine xylophone tones of the piano that dive like a roller-coaster along the cello’s breathtaking glissandos into “rats’ alley/Where the dead men lost their bones.” The excitement was so intense the audience lost their impeccable concert manners and exploded in applause.

The Largo featured a kind of walking bass-line in the piano to which the cello crooned softly as a mother consoling a very sick child. The finale had a Prokofievian rudeness with Mr. Maisky bowing his cello like a crazy person, alternately frenetic as a bedbug and like a catatonic elephant, while Ms. Maisky pounded the keys like a bailiff or unleashed perpetuum mobile arpeggios like a tide of ball-bearings under the giant floppy shoes of a clown. After all that momentum, Shostakovich snuffs the movement out like a candle.

It being a Russian-flavoured audience collected into Koerner Hall by local Impresario Svetlana Dvoretskaya, there were many encores, several connecting the Maisky’s taste for Russo-Spanish stylings such as Pablo Casals’ The Song of the Birds and Shchedrin’s In the Style of Albèniz.