Posted on September 13, 2013 by Stanley Fefferman 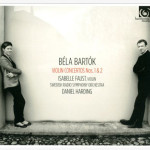 “One’s work shows more exactly than a biography the noteworthy events and driving passions of a life.” Béla Bartok.

The noteworthy event driving Bartok’s passion at the time of his first violin concerto’s compostion in 1907 was his intense love affair with violinist Stefi Geyer for whom Bartok sketched the opening bars during the summer their relationship began. A year later, Stefi Geyer broke off the affair and declined to even look at the manuscript of the two movement concerto dedicated to her. It had to wait for its first public performance until 1958, 10 years after Bartok’s death.

Bartok used bits of it in several other compositions and his annotations, as Ms. Faust discovered, revealed never before known indications of character and interpretation of the work in phrases such as ’utterly desolate’, ‘somewhat obstinate’,’with restrained passion,’ ‘always volatile’, ’ as if in a dream’ and, ‘exhausted’.

The first movement of the concerto, which the composer himself describes as ‘music that came straight from the heart’, begins with a ‘supplication’ by the reedy solo violin that unwinds slowly, awkwardly as a colt finding its first legs, or as Ms. Faust puts it in her notes, “as… hopelessly romantic and idealistic Bartók lays his heart at the feet of the woman he adores!”

One by one, six violins add their voices to a chorus that braids a tension finely drawn, like a nerve at the edge of grating. Waves of orchestral horns and brass undulate, sweep, then subside as the oboe leads to a change of mood, an idyllic summertime pastorale that overrides young Bartok’s everpresent hysterical miasm with a grandeur in the brass and celestial harps rippling like a sacred river moving through a sylvan glade—an ideal dream that fades as it must.

The second movement is divided against itself, questioning and mocking its own inherent lyricism. Ms. Faust plays without vibrato: Daniel Harding directs the orchestra to dispute the violin’s effusions. Even Ms. Faust’s faultless virtuosic birdsong imitations seem ironic. The final pleading violin solo is submerged under a gigantic orchestral crescendo.This music marks the beginning of Bartok’s maturity as a composer.

The second violin concerto has been famous almost forever. It would be pointless to reiterate the biographical implications of the Violin Concerto No. 2, Sz 112 , that premiered in Amsterdam on August 23,1939, a fortnight before WWII was declared, and less than a year before Bartok left his home in Hungary for America.

It might be more apt to note that this concerto in three movements is a supreme accomplishment of Bartok’s maturity. This maturity, musically speaking is marked by a predilection for dissonant means of expression mingled with serenity. Bartok had evolved his own style of organization that was tonal but in its way free of the major-minor system. The thematic material of all movements of the concerto draws explicitly on folk music that Bartok had been collecting and studying for 30 years. But his use of it did not celebrate nationalistic themes. Rather, following his inclination for variation, Bartok broke down the folk elements and transformed them relentlessly. The third movement, for example, consists entirely of variations of themes from the first movement.

From beginning to end, Isabelle Faust gives a natural account of Bartok’s music, its bite and its ecstasy. Her playing breathes. The Swedish Radio Symphony Orchestra under the direction of Daniel Harding are inspired partners in this landmark recording.