Posted on September 6, 2013 by Stanley Fefferman 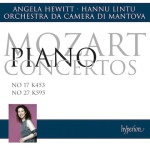 The long ensemble introduction to the G major, K. 453 has a plangent, leisurely, chamber-music quality that continues in the exchanges between Ms. Hewitt and the prominent winds. I found unusual pleasure in her imaginative, colourful dynamic differentiations, especially during passages when Conductor Lintu reduced his strings a mere quartet. The moods are of a courtly lover, alternating between carefree and imploring. Mozart’s own cadenza ends quietly, but the movement concludes in a clash of sharp violins and deep piano.

The second movement is also courtly, featuring an intimate, operatic dialogue between the piano as soprano and the oboes and bassoons. The closing theme, as Ms. Hewitt plays it, is the perfect representation of a certain mood, the name of which hovers on the tip of the tongue. It is simultaneously familiar, and an enigma that “teases us out of thought.”

In the third movement, trumpet fanfares escort the piano into a set of variations where she engages the strings and winds in nimble dance-turns through moods both major and minor. The ending Mozart wrote is comic-operatish, following fuss with fun, melancholy with mockery, flying free like a bird released from its cage.

Piano Concerto No. 27, K595 came seven years later, during what was to be the last year of Mozart’s life. The opening passages have the sense of a prominent figure being led in  courtly procession through a hall amidst the acclaim of the populace. One can never but quite certain whether the occasion is triumphant or a funereal. The  prevailing tone is undoubtedly large-scale symphonic, a combination of strings and tutti that approaches the pomp of Beethoven.

Ms. Hewitt’s treatment inspires a sense of uncanny closeness with the orchestra, like a soloist in an opera, bending the orchestra  to her aria. The power flows both ways: as clarinet doubles the piano solos, the piano repeats figures of the orchestration, blending them together. Keyboard themes characteristically return cloaked in subtle chromatic dissonances, imitated by clarinet and shadowed by bassoons. The mood is bittersweet. The Larghetto is simple, and Ms. Hewitt does not allow it to lag. The Finale has an elemental, mythical ring, in the spirit of the Zauberflote, forward looking but with an awareness of impermance, and therefore gravity tempers good cheer.